Morocco undertook necessary reforms on the path of democracy against the backdrop of the Arab Spring, Foreign Minister Saad Dine El Otmani said.

El Otmani told the Turkish news agency, Anadolu, that the wave towards greater democracy in North Africa and the Middle East showed that the people of the region are alive and that they are not slaves of their governors.

El Otmani, who paid an official visit to Ankara on March 18-20, added that Morocco witnessed protests led by the youthful, noting that HM King Mohammed VI showed understanding towards these demands.

The Minister also shed light on the large-scale reforms launched in Morocco to strengthen democracy, notably the constitutional reform.

On bilateral relations with Turkey, El Otmani said that the two countries have longstanding brotherly ties, adding that Rabat and Ankara coordinate their stand at the international  level.

He also stressed the need to bolster economic relations between the two countries.

Concerning Syria, El Otmani reiterated Morocco’s position against the armament of the Syrian opposition. He said pressure should be put at the Syrian regime and assistance should be delivered to the civilian opposition with a view to putting an end to bloodshed through democratic means.

Morocco as a non-permanent member of the UN Security Council spared no effort to break the deadlock in the Syrian crisis and protect the civilian population, added El Otmani. 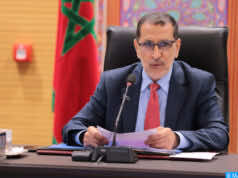