Tens of thousands of students protested Thursday against a 75 percent tuition hike at universities in Canada’s mostly French-speaking Quebec province, bringing downtown Montreal to a standstill.

“We want to study, not go into debt,” shouted the demonstrators, who converged on the metropolis from across the province, packing a two-kilometer (1.2-mile) stretch of the city’s main streets.

Since mid-February, nearly 300,000 students have boycotted classes, blocked bridges and held smaller protests around the province against the government’s plan to raise tuition by $1,625 over the next five years.

The fees will still be significantly lower than in other Canadian provinces and U.S. states, but higher than in many European countries, according to the Organization for Economic Co-operation and Development.

Local public opinion is largely split between proponents of higher education as an investment that provides people an opportunity for a better job, and supporters of education subsidies, who argue that all of society benefits from having an educated populace.

The Quebec government has said it must cut education subsidies as part of a larger effort to tackle a burgeoning budget deficit, expected to reach $2.4 billion this year.

But students, such as Marc-Andre Levesque, 21, say the increase is “too much, too soon.”

“It will be the middle class that pays for this,” he told AFP, wearing a red square on his lapel symbolizing that the hike will put student finances “squarely in the red.”

When it begins to take effect in September, the tuition hike would also impact nearly 10,000 French students who pay the same fees as local students to study in Quebec as part of an education pact between France and Quebec. 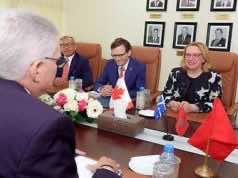 Quebec Will Open Representation in Rabat