GO MOROCCO: It’s the second biggest city in Morocco, and it is the country’s culinary capital. Armed with a cook book rather than a guide book, KEN DOHERTY explored the exotic sights, sounds and tastes of Fez. 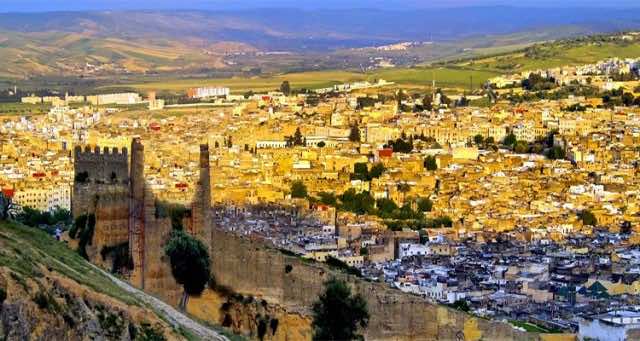 GO MOROCCO: It’s the second biggest city in Morocco, and it is the country’s culinary capital. Armed with a cook book rather than a guide book, KEN DOHERTY explored the exotic sights, sounds and tastes of Fez.

The book never mentioned the hot tiles of the hammam that sizzled against your skin. Nor the friendly gentleman who, with a slight glint, offered his services in everything from the abrasive art of scrubbing and pulling your body till it felt like someone else’s, to the relative relief of dousing your already overheated skull with a bucket of scalding water.

It was a classic food book, as essential a mosaic to understanding the ancient city of Fez as Ulysses is to Dublin. Although the social customs of eating are explored in exhaustive depth, unsurprisingly it’s a bit thin on the etiquette and mores of sauna politics.

We were on our own, but with Traditional Moroccan Cooking leading us by the hand, at least we would eat well. As we coasted over the meticulously ordered patchwork of green fields, we could have been mistaken for thinking the aircraft was flying over the more lush and pastoral countryside of northern Europe.

It was late spring and the oppressive heat had yet to scorch and cul nature’s less hardy elements. Although holiday anticipation might lead to suspension of any previously held critical faculties, there was no denying it was bloom time in Morocco and we were geared to fall under its spell. This was an Arab Spring of a different kind.

We booked a short stay in one the many traditional riads or dars, a traditional Moroccan house or palace with an interior garden or courtyard, dotted throughout the city.

Since Fez – the oldest, continuously working medina in the Islamic world – was declared a Unesco world heritage site, there has been a scramble to restore mosques, fundouks (inns) and private homes in the city. Government grants have helped locals and foreigners spruce up the crumbling medieval centre. This quiet revolution in building and restoring has been taking place since the early 1980s.

Those tiring of the hedonism and intensity of Marrakesh are heading north to a metropolis that for centuries has been the spiritual, cultural and – of most importance for myself, partner and nine-month old daughter (although she doesn’t know it yet) – the culinary centre of Morocco.

Before low-cost airlines threatened to unravel the arcane soul of its dense and tangled streets, a recipe book, written more than 50 years ago, has done just that.

Traditional Moroccan Cooking: Recipes from Fez by Madame Guinaudeau sought to copperfasten the ancient city’s food heritage before it became corrupted by any outside influence, although she was a foreigner herself.

In doing so, she revealed not only the mouth-watering secrets of an often impenetrable city, but also created a vivid document championing human endeavour and ambition. The city, its people and Fassi cuisine jump off the pages. It was the perfect companion.

A quick internet search tailored to our likes (food, authenticity, baby friendly, central) and up popped a gem. The boutique riad Le Jardin des Biehn was perfect for our stay. A vast overgrown and mosaic tiled Andalucian garden heady with the scent of citrus, roses and hibiscus was an ideal playground for our daughter, who was just learning that forward motion on all fours would make things happen far more speedily.

The riad was central in the medina, but not too far in, where the streets become so small and winding they don’t have names. Rumour had it that the staff were wonderful, and indeed they were. What we really signed up for though, was the riad’s own restaurant, Fez Cafe, a place that Madame Guinaudeau might recognize, but not frown upon its more contemporary flourishes. We ate crayfish bastilla, lamb chops and artichoke pizza on different nights.

Most meals were taken in the garden, which came alive after dark, with all manner of mysterious tweets and rustles, a symphony that was accompanied by the haunting and beautiful call to prayer, the sounds of which seemed to pirouette from one of the many hundreds of minarets and become one thrilling celestial reverberation.

The oldest part of the medina, where you will probably spend most of your time getting lost, is essentially made up of two main streets – Talaa Kebira and Talaa Sghira – that plough headlong down through the swarming souks to the university (the world’s oldest) and the main mosque.

At certain times of the day, there was such a swirl of people joining these streets from the thousands of others that if you stood still for an instant, the momentum and density of the crowd would carry you to your destination, feet hovering just above the ground. Most routes from here lead to the ancient tanneries, where even if you got lost, the smell (think rotten eggs) will tell you that you are heading in the right direction.

These dusty streets and alleyways were where Madame Guinaudeau would have spent her time observing life that has changed very little before or since. “There is constant cries of Balek, Balek; buying, selling, discussing; children pushing and crying; great jars of oil being carried home; donkeys stumbling along; proud distant students passed by hurrying craftsmen; mingled smells-spices, oil, jasmine and orange blossom, remains of stale vegetables and datura. Thick dust makes a hell of the hot, crowded street.” Her words could have been written yesterday.

Most of the food in the medina was served in tiny rooms facing the street, furnished with nothing more than formica or plastic tables and wobbly unmatched chairs. Lamb brochettes, tagines or steaming bowls of bessara (dried fava bean) soup were the order of the day. Don’t haggle over the price, it’s cheap. Mint tea is ubiquitous. Those with a sweet tooth will enjoy all manner of treats. Honey-drenched beignets, cinnamon and sugar-dusted briouats filled with sweet rice and the famous almond stuffed M’hanncha or snake. “Believe me that this is food for the gods”, Madame Guinaudeau wrote.

If cities are representative of human ambition, then Fez is the model city. It is an intoxicating mix of artisanship, intellectualism and spirituality. It is a sprawling antithesis to blandness and conformity.

We came armed with an eloquent cookbook to usurp an ancient cuisine. We left a little more knowledgeable about its rich gastronomic traditions and more enlightened about the intricacies, durability and energy of a living, breathing medieval city. We will be back.

Medina Cafe, 6 Derb Mernissi, Bab Boujloud, Fez Medina, 00-212-535-633430. Near one of the main gates into the medina, this small restaurant serves all the classics including bistilla (pigeon pie), kefte tagine with eggs, and couscous with vegetables. Eat on the roof terrace above the din of the city.

Cafe Clock, 7 Derb el Magana, Talaa Kbira, Fez Medina, 00-212-535-637855, cafeclock.com. Mike Richardson, former maitre d’ of the Wolseley and the Ivy, has given the medina an unconventional meeting point for expats and locals. Famous for its camel burgers.

There are no direct scheduled flights from Dublin to Fez. You can fly with Aer Lingus or Ryanair into one of Barcelona’s three airports from Dublin or Cork. You can then take a connecting flight with Ryanair from Girona to Fez. Ryanair also offers flights from London Stansted to Fez.