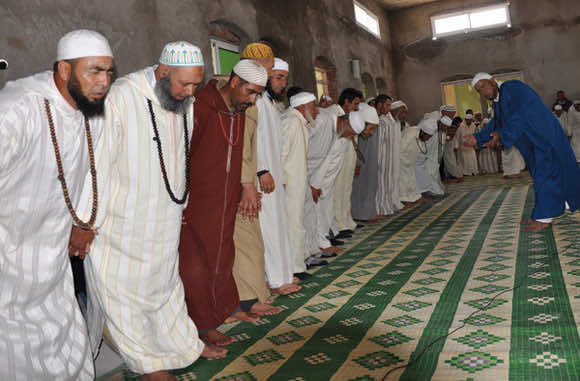 Beni Mellal, Morocco – It was early afternoon when buses from all over Morocco arrived to the Sufi village of Madagh, home to the famous scholar, Sayyad.

Different families, poor and rich, withstood the winter’s cold and heavy rains as they made their way to the Zawya. Boys and girls were dressed in their most immaculate clothes, while their bodies were scented with heavenly oils. Girls added beautiful makeup and dyed their hands with henna, hoping to attract the attention of their opposite sex.

The harsh winter weather did not prevent food vendors to open their modest shops for the thousands of visitors. Fassi hats, Sufi chaplets, Bzioui djellabas and some Arabic books were all on display for the visiting crowds.  These “pilgrims” were flocking to call on Sayyad and celebrate the Prophet’s Birthday. Mystical chants echoed loudly from cassette players as visitors ardently praised the Prophet of Islam.

The gendarmerie and police were called to maintain order by asking bus drivers to show proper documentation and by directing traffic. This was not a social protest or political manifestation. It was an annual peaceful and spiritual meeting of adherents to a mystic Sufi order. Everyone shared lovely smiles and exchanged warm greetings. In the middle of the crowd, a man named La’rbi, dressed in a brown gown, stood still as he observed the visitors.  He would later cleanse himself of the dust and head towards the masjid where he heard beautiful seraphic voices chanting, praying, and calling to Allah, the God of Muslims. The chants were repeated in such celestial harmony that echoed from the mosque’s walls.

As he entered the mosque, La’rbi performed his after noon prayer and then retired to a corner adorned with exquisite architecture, reminiscent of Muslim Spain. He closed his eyes, took out his chaplet and suddenly, his mind, body and soul were overtaken by the seraphic voices chanting:

Three youngsters stood on his left and naively asked: “where is the Sayyad? He didn’t show up tonight?!” Another youngster, whose face brimmed with innocence, was standing on his right and gently replied: “he is sitting there. Can’t you see him?” Silence crossed the threshold and few people were able to discern the second boy’s response. As the opening of the Prophetic night was announced, a scent similar to the fragrance of ambergris spread over the large square of the mosque. In front of the visitors, Shorfa (noble men), full of love and esteem, welcomed the desperate faces with beautiful smiles. They were like heaven-blooms booming at the advent of the hopeful Arab spring.

The festivity of the Mawlid (birth of the Prophet) brought the huge crowds to Madagh. The Fokaras and the Fakirates had their own separate places where they chanted a myriad of Prophetic chants as a sign of love for their Beloved Mohammed. Their sweet-sounding songs kept La’rbi marveling at this lovely moment under the wings of a white-bearded man. Now, the human souls could not resist responding softly at the enchanting phrases flying in the air.

Among the visitors were those who wept as they longed for the divine. Their situation is akin to one bird singing helplessly alone from his earthly cage for liberty and self-release. Other visitors danced ecstatically, forming a dervish circle that seemed to be choreographed by a celestial angel. At the opposite side, the Sayyad, again involved in his usual silence, seemed spying over the hearts of his visitors, cleansing them silently and nurturing everyone from his ethereal wine.