On Tuesday evening, the streets of our hometown were all deserted. Children were not playing in the playground as usual. What one could see is a herd of night girls passing by desperately. What happened? The relentless drops of rain, whilst bringing joy to the hopeless farmers, urged the pedestrians to hide themselves from cold as a crucial football match is going to cuddle them up soon.

Parents and their children were all sitting in front of the black box indoors and outdoors, watching an unprecedented movie show never broadcast by Hollywood. At home and in the local cafés, eyes were fixed on the small screen. Minds were totally absorbed in what’s going on. As they couldn’t find a comfortable seat, school children hurried to bring some broken chairs from their houses and consequently tolerate their old mums’ curses. For 90 minutes or so, the Moroccan spectators, in Beni Mellal and elsewhere, would switch into their favorite Channel Al-Jazeera and thereby feel one with the game.

Tears of triumph flowed before the football match started. The most celebrated football legend Lionel Messi stuns, fascinates and continues to astonish the Moroccan masses in the largest stadium, Camp Nou. Now the Italians are to withdraw and let the ball dance, sing melodious songs of victory which Robinho and Ibra would never relish. Marvelous Messi would skillfully dribble, ethically pass on the ball to his fellows, showing personal qualities of maturity and high professionalism; hence cooling down souls of his fans, restoring joy to many poor children.

None would then deny that the pleasure our children missed in their classes have been found in watching this fabulous player. Ask any pupil in your class: “who is your favorite footballer?” He will definitely say, “Messi”. Ask their teachers, “what their students love much?” They will never hesitate to openly declare, “Messi!”.  Ask any professional soccer player in Europe, Africa and America: “whom you love to play against?” They will voice, “Messi”. And then ask any fair referee: “which football player you favor most? They will certainly agree that it is none but Messi.

He is by no means enslaving many of our youngsters thanks to his artistic football talents, singling him out from all world players. Sorry, this is not Maradona. This is not Pele, this is Messi.

The TV commentators hardly could maintain some distance while reporting on football matches wherein Messi is playing either in Champions Leagues, la Liga Espanola or la Cupa del Rey, or any other football competition. Messi is the focal point of any praise, the dynamo which sets the whole machine into work. And I have thousand reasons why I would vociferously side with Messi, my favorite!

Honestly, whenever I watch his matches, I would quarrel with my friends about him. “He is absolutely the best player. Take it or reject it,” I would argue. My brothers could hardly remember the names of some relatives, but they could easily remember the superb football matches of Messi.

But why do I love Messi?

I will never forget the football match gathering the two outstanding teams, F.C. Barcelona and Osasuna. It is reported that before the match, the Barcelona ace met a Moroccan 11 year-old-boy called Soufian, whose legs have been amputated due to a serious physical illness. Though he was provided with artificial legs, the lovely Soufian did not lose his strong passion for football. He then could feverishly follow Messi’s enormous performances in the realm of football with his team Barcelona, scoring in goals and adding up to our enjoyment.

As a token of admiration for the Catalan club, the Moroccan boy, who does share probably some pitiful stories with Messi, resolved to paint his artificial legs with the Barça colors. This, I strongly believe, would alleviate the physical pains and serve as a medical treatment for Soufian! But Soufian is so lucky unlike many children who have never met Messi.

Touchingly, when Messi met Soufian, he promised that his first goal would be dedicated to him. He was not disappointed! After scoring his first goal, Messi remembered Soufian and this time, he would not point to the Sky as he usually do, but would softly slap his thighs. That goal, I realized, should not be counted. It is neither for Barcelona nor for Messi himself. Yet, it is for the Moroccan lovely boy, Soufian. Would any other player do that, I was left to wonder, but alone!

This was both a sign of love and care from Messi to Soufian. It was undoubtedly a characteristic gesture of generosity by one of the most talented footballer in history. This was a strong evidence for me to take for granted that the genius boy is Moroccan and not Argentinian. It is not blood or even space that can make up our nationality, but our strong love and veneration for people that can do so. Don’t be taken aback if you see your kid putting on jersey 10 colored in red and blue tripes. They want to be like Messi.

Three years have passed. I, however, recall that when I asked my students to answer two different reading comprehension text (A/B model), a student was mad at me. What I did not expect was that the same student was handed over a test about Ronaldo and he could not resist shouting at me: “I will never answer any question, Sir.” Asked why? The student immediately replied, “I do not love this footballer. I love Messi, instead.” I then had to hand him the test talking about his favorite footballer, Messi, I mean Moroccan Messi. 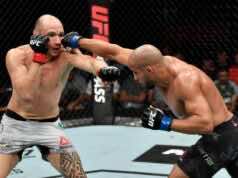