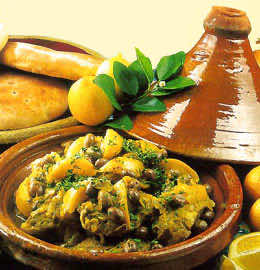 Tagine is named after the special earthenware pot in which it is cooked. Yet, for all Moroccans it connotes an irresistible delicious taste and a pleasingly sweet smell. It is cooked and braised slowly at low temperatures, resulting in tender meat with aromatic vegetables and sauce, and it is served hot.

It has different distinctive sweet tastes depending on the ingredients, but the process remains the same. Today’s tagine is vegetables and meat based. Enjoy it!

This authentic Moroccan tagine recipe will take you to slow-cooked perfection in a simple method.

1.       Place the meat with all these spices and the 3tbsp of oil in the tagine, mix them well and let it be soaked for few minutes before cooking.

3.      When it starts cooking add slices of onions, cover the tagine again and heat for 10 minutes. Stir frequently.

4.      Add a small amount of water (not too much). Cut potatoes, zucchini, carrots and tomatoes into small slices, and place them decoratively on meat.

5.      At the top, add some parsley, a slice of pickle lemon some salt, some pepper and other spices (according to your taste).

6.      When the tagine is cooked (roughly 40 minutes), put olive oil and some olives then cover the tagine.