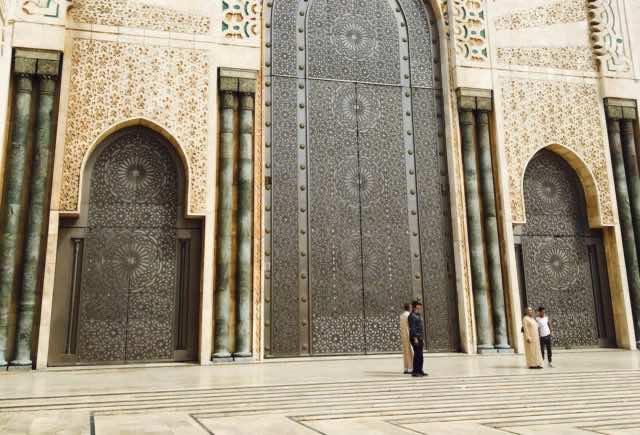 Beni Mellal – Sunday morning found me in the economic, business city of Casablanca. The way was not that long.

Seagulls, pigeons were soaring above me more freely, communicating to each other glad tidings of joy, life-long happiness we missed. The weather was a little cloudy, but it did not hamper me, many other people overseas, to come and smell fresh cool air nearby one of the highest towers in the world, Hassan II mosque.

Some people woke up earlier to practice some physical exercises. Others, seemingly, had a long walk by the marvelous seaside paving the way for meditation and contemplation to take place, calling forth memories of success, hope.  Other memories, personally I don’t know. Some police agents, newly recruited, kept gazing at me. And I felt myself forlorn, yielding to a myriad of conflicting tunes, riding an Arabian horse, withstanding the windy desert sand dune.

Carrying a very heavy blue bag I bought from Portugal last year for 15 Euros, after much bargain with a Chinese guy, I was left sitting on a threshold, pondering upon the lovely people I have met, those whom I am going to meet.

Thereupon, a gardener, intriguing as he was, would intend me after much reluctance. He was fighting with himself. He then gently asked, “are you waiting for somebody, Sir?” “Yes!” was my swift reply. I had to look smilingly at him.  In much stillness, I added, “an endearing person is going to show up soon.”

He kindly informed me that the mosque had many doors and that I had to stay wide-awake. The bus may come at any time. Being so strange from the metropolitan city, I gathered up enough breath and made myself comfortable. Those who were passing by me, would fix their eyes on my big bag. In a low tone, they would exchange some murmurs and then continue their walk.

Masses of people cropped up suddenly. Their non-casual clothes, blonde light skin suggested that they were all foreign visitors engaged in an organized trip to the Maghreb, the land where saints are numbered much as olive trees, where awesome secrets speak both in nature and man alike.

Young couples were equipped with huge cameras to photograph the magnificent panoramic view. Some smart little children were preceding them as if in a Cologne or Düsseldorf festive carnival. I couldn’t lose trust, as I credited that the person, who brought me there, is going to rise soon from the huge crowds of visitors and tourists I couldn’t easily count.

What made me deeply relaxed was this amalgam of people coming from all parts of the globe, massively plumping for this gigantic monumental mosque, classified by the UNESCO amongst the largest mosques in the world. They didn’t choose Cairo’s pyramids or Paris tower of Eiffel. They didn’t drop by the other natural seven wonders of the world, even.

I was concentrating in this spectacle and was involved in a halo-like mystic experience. Meanwhile, I was casting my eyes around the open square; hopefully I could find what I was looking for. Therein, that person came, escorted by ten strongly-built bodied men, ten much pretty women, elegantly dressed, dying their soft hair, shaping decently their eyebrows in the German fashion with much care. That person was akin to a handsome two- winged seraph overlooking the other co-visitors before the grand mosque.

As soon as she arrived, she turned rightward and leftward. Apparently, she was looking for someone. She approached much closer, and we warmly greeted each other. There we went together, hand in hand, to the Muslim mosque, Hassan II.

A foreign elderly, whose identity was unknown to me, was our guide in this visit. He was wearing shabby clothes and repeatedly would frown at me. I couldn’t understand why. So aloof, spoke words all Deutsh to me. He was putting on a farfetched hat, a discolored jellaba like a rural folk singer found himself a tourist guide by chance.

What I had never expected was that one needs to purchase a ticket beforehand to have access to the towering mosque, for which, my mother told me, we had previously paid 20 dirhams or maybe more.

Adamantly, I made up my mind to converse with the two door keepers to let me get in for free. They were strong-headed people, not even welcoming to me. But to be frank, they peacefully convinced me to retire back and get myself a ticket. I was not aiming to pray this time, but merely to stretch my eyes on God and manmade beauties structured around.

While foreign visitors were provided with their tickets by the guide to enter into the beautiful mosque, taste the Moroccan spirituality proffered at a low price to them, I had to pay 60dirhams to in turn enjoy savoring some of the divine mysteries unfolding inside the mosque. I was so beguiled by the Moorish-like architecture, the golden ceiling and the beautifully manufactured silver doors matching those of Heavens, of al-Hambra!

I was exposed to the expression of awe and celestial atmosphere, even though my journey was not for praying. After all, I was astounded by the lazers shining in the direction of Mecca, the automated sliding roof opening to the Sky, the glassy floor where worshippers can kneel over the sea, the pretty carpeted soil and the Turkish-style baths used for washing and ritual ablution.

Like all people, we had to take off our shoes to step forward. Plastic bags were provided and a huge smile covered the visitors’ faces. We were attentively listening to the instructions of our guide and debating over God’s marvels, beseeching on the water, where God’s Throne was supposed to be.

Astonishingly enough, the Great Wall of China and the Taj Mahal in India couldn’t captivate these Non-Muslim visitors’ attention this time. At least, at this moment! Probably, there is something special and exceptional — we don’t know — that evoked these people’s intense curiosity, eagerness for discovery and exploration.

Surely, the mosque is the best place that can speak for us. That can represent us. That can help us regain Sultan Saladin’s glory, commander Tariq Ibn Ziyad Andalusia rich history. I wish I could pray this time but towards Palestine Jerusalem, make several tours around, embrace ecstasy, soothe many unfortunate children’s afflictions over there, but with a heartfelt brotherly prayer inside the mosque.

Isn’t high time for us to do that? I pitifully consoled myself whilst some uncontrolled tears went down, and my tearful eyes were examining every beautiful side of the mosaic semi-circular niche of the mosque, the beautiful Qiblah.

From the Muslim mosque, a call is invariably given, five times a day, glorifying the Oneness of God, sent marvelously in all directions “Hasten to prayer” to cleanse ourselves and be in utter servitude to God, to his noble creatures. But my soul mounted up to the minaret and started, crying, summoning all, come to Jerusalem, our ancestors are buried there.

Meditating the uncountable wonders of God, inside and outside the mosque, is itself a prayer. The best prayer! But were the Non-Muslim visitors praying while roaming inside the mosque? Were they secretly conversing with Allah; hence aiming to achieve a close spiritual union with the divine? Were they reciting some hymns and liturgical prayers in private, thanking God for this memorial royal visit to the mosque? Multiple questions kept hammering in my mind for awhile.

Providing Morocco with a unique landmark, the mosque is open to all people, Muslims and Non-Muslims. The whole day! Guided tours are arranged for foreigners in advance, all of which open up people’s minds that Islam is both a flexible and a universal religion, capable of embracing ethically all human beings irrespective of the difference in color, race, culture or whatsoever, and that Morocco was and will always be the land of spirituality and hospitality par excellence.

What I was also heedless of was that Non-Muslims contributed to this elephantine building. The Bouygues, a French industrial group worked collaboratively with their Moroccan brethren to set up the splendid mosque on the Atlantic Ocean. The lovely conception was designed by Michel Pinseau, a French architect, also reported to have worked on the Champs-Elysées area.

And the idea pertained to the former Moroccan king genius Hassan II, cleverly thought that all Moroccans should financially contribute to the whole project. That was in conformity with the Prophetic tradition, going: “Whosoever builds a mosque for the sake of Allah, Allah will build him a house in Paradise.”