Tunisia’s President Moncef Marzouki on Monday slammed the violence around an unauthorized demonstration in central Tunis that saw police use tear gas and baton-charge protestors.

“Such a degree of violence is unacceptable,” he said on national television, laying the blame both on protestors who tried to rally at an avenue that has been banned to demonstrations and at police dispersing them.

At least 15 civilian and eight police officers were wounded as a result of the demonstration, according to hospital sources and the interior ministry.

“I deeply regret that peaceful protestors were injured,” Marzouki said, deploring “the unacceptable standoff between the state that has banned demonstrations on (Habib) Bourguiba Avenue and those who deliberately violated the ban.”

But he also stressed that the government had his full support. Monday’s violence was the worst in the Tunisian capital in months, with riot police firing tear gas and baton-charge hundreds of demonstrators marking Martyrs’ Day and protesting against a ban on demonstrations on a main thoroughfare in Tunis. 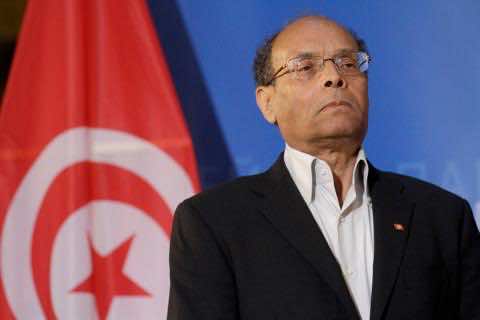