Two people were killed during clashes between residents of an Egyptian town close to the Libyan border and security forces, security officials told AFP on Wednesday.

Residents of Sallum in western Egypt on Tuesday night blocked the main motorway heading to Libya to protest security restrictions on cross-border traffic and increased tariffs for lorries.

Egypt has been gripped by security related problems, protests and clashes since a popular uprising that toppled president Hosni Mubarak last year. 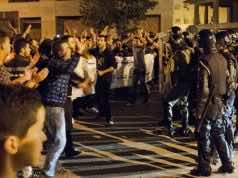