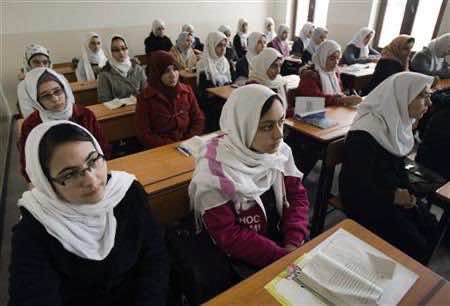 Casablanca – About 150 girls in an Afghan school were poisoned after having drunk water in a school in the north of the country.

According to official sources, this poisoning should be the act of extremists opposed to women’s education, explains Reuters. Authorities did not point any accusation against any group for fear to raise retaliation. Jan Mohammad Nabizada, the spokesman of the ministry of education in the northern region of Takhar, declared:

“We are 100% sure that the water they drank at school was poisoned. It is the idea of either adversaries of women’s education or irresponsible armed individuals.”

No death was announced, but half of the victims, who were between 14 and 30, fainted after having suffered from severe headaches and vomiting.  Some of them are now in a critical state while others were able to go back home after having received the necessary treatment in the hospital. Dr. Hafizullah Safi, director of the department of health in the province of Takhar, explains:

“While examining these girls, I can definitely state that their water was contaminated by the use of a certain kind of poison (…).  But we don’t know yet how their water got contaminated.”

It is important to note that in 2010, about one hundred female students and teachers received the same fate, recalls CNN.

When the Taliban were in power between 1996 and 2001 they forbade women’s access to education.  But since their eviction, women went back to school especially in Kaboul, the capital.  Nevertheless, women, female high school students, teachers and their schools were victims of attacks.  What is new about the situation is that this aggression occurs usually in the South and East of the country, judged more conservative, where support of Taliban uprising is more greeted as opposed to the North where the poisoning took place.

“Last year, the Afghani government had announced that the Taliban had withdrawn their ban against women’s access to education.  But Taliban never provided any explicit confirmation of this statement.”

At the end of March 2012, a report by Human Rights Watch denounced the situation of 400 women prisoned for “moral crimes.”

Halima Ouamouch is a Professor of English studies at the University of Hassan II, Casablanca.