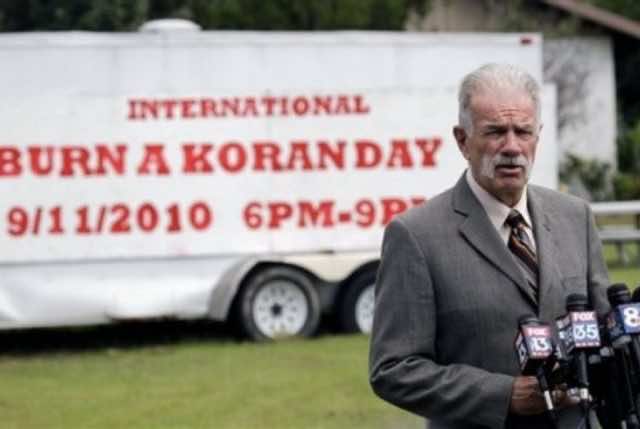 U.S. pastor Terry Jones, a self-professed scourge of Islam, has threatened to “burn Qurans and images of Prophet Mohammed” if a Christian religious leader in Iran is not released from jail, he announced on his organization’s website this week.

Jones has set a deadline of 5 p.m. on Saturday April 28 for the release of Iranian pastor Youcef Nadakhani otherwise he warned of a repeat of last year’s Quran burning which led to widespread rioting and deaths around the world.

Nadarkhani, who has been charged with apostasy and sentenced to death for leaving Islam and converting to Christianity, receives support from Jones through his organization, Stand Up America Now.

“The time of doing nothing must come to an end. We call citizens around the world to burn Qurans and images of Mohammed publicly if Pastor Youcef is executed and not released!” a statement on the site said. It is unclear which images of the Prophet (pbuh) the statement referred to.

“Even the actual thought that someone could possibly be executed, imprisoned, just simply because of what he believes is totally barbaric … Again, another example of the radical element of Islam, and its unbelievable violations of human rights, and freedom of speech.,” it added.

In March last year, Jones burned a Quran on the grounds of his church in Florida which prompted attacks on a U.N. compound in Afghanistan where seven people died.

When asked about the cost in terms of the lives lost in his previous escapade, Jones told the Guardian that the impact of his Quran burning was not his responsibility.

“What happened last time and what could happen this time is not our responsibility. All we did was burn a book. It posed no threat to anyone else, yet riots broke out several thousand miles away – which just proves how extreme Islam is.”

He threatened to burn more books on last year’s anniversary of the September 11 attacks but after international outrage, the burnings never took place.

The Pentagon is urging restraint after the Florida pastor announced his threats.

“We are aware of Pastor Terry Jones’ threat to burn a Quran, and are monitoring the situation,” Pentagon spokesman Commander Bill Speaks told the Guardian. “The last time Pastor Jones burned a Quran, back in March of 2011, more than 16 people died and more than 90 people were injured from the resulting protests. We hope Pastor Jones will take into account the safety and welfare of deployed U.S. military personnel before engaging in such an activity again.”

There are also worries that Jones’ behavior could be used as insurgent propaganda if the pastor burns copies of the Quran again.

“Islam doesn’t allow us to dishonor the Christian holy book, so it is the job of Christians to respect the holy Quran as well,” Jamshed Hashimi, a 45-year-old teacher at one of the private universities of Kabul, told the newspaper.

“It is the job of the Americans to stop this person, otherwise the militants, the insurgents will use this opportunity and the people will help them,” he added.