Morocco World News
Home Highlights on Morocco Rachid Nini Released After One Year in Prison, Calls for Adoption of...

After having been behind the bars for one whole year, Rachid Nini, the most famous Moroccan journalist, has been released earlier today. On this occasion, many of his readers, followers, sympathizers and human rights activists, hastened to catch a glimpse of Nini in the vicinity of his home in Benslimane and to listen to the much anticipated the speech he was expected to deliver there.

In his short speech, Rachid Nini, editor of the daily Al Massae, expressed his sincere gratitude to 20 February movement activists who called for his release in many demonstrations, to the Human Rights associations who stood by him during his trial, and to all Moroccans who have defended his freedom. The journalist seized the opportunity to bring the attention of people who gathered near his family house  to one of his main principles, his defense of freedom of speech.

At the cordial gathering today where Rachid Nini uttered his first words, he drew Moroccans’ attention to the importance of freedom of speech by stressing that his case would hopefully be the last one at Moroccan court. With the increasing number of trials among other journalists and bloggers, Nini vehemently called for the necessity of passing a press law that will guarantee Moroccans more freedom of speech.

Approximately 1500 Moroccans belonging to different associations, and coming from different regions have gathered around Nini’s home today in Benslimane to celebrate the release of their Moroccan freedom icon and to give him the red-carpet reception he deserves.

Chouf Tchouf”, Nini’s daily column, which sent him to prison, has gone blank for a year now. Now that Nini is set free today, time alone will tell us whether the column will be revitalized and brought to life, particularly that the majority of caged Moroccans find solace in what he writes. Many questions can go unanswered until he begins to put pen to paper once again. The main question that comes to mind is: Will Rachid Nini carry on writing with the same fierceness, frankness and without frills as was his habit before he was imprisoned? Time will tell. 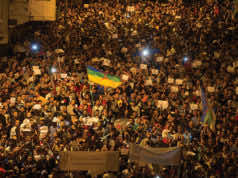