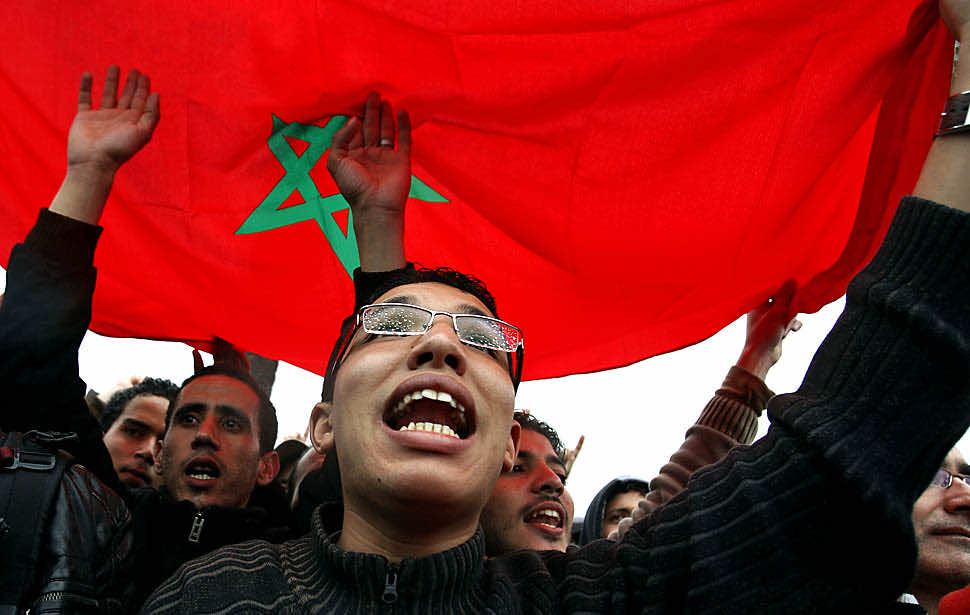 Beni Mellal – Suppose you were a sociologist and you were asked to scale the heavy problems flooding Moroccan society now. Which problems would you give due priority?

Indeed, serious problems would all smile up from three mugs, don’t you think?

Unemployment, the most disastrous problem suffocating us, which has resulted in the incarceration of some people, would crop up from one mug.

Poverty would smile up from another mug. Poverty itself had been the major focus and issue for many national and international NGOs. Mug three? It would certainly show humiliation – the Moroccan expression for the word “al Hagra,” the loss of respect among us.

The unemployed are manifesting in the capital, in front of the parliament, on the streets, in front of their provinces and municipalities. Their goal is to gain an honorable job, a reliable income, a little smell of the Arab dignity once reserved for some notables. People wanted to work to stop this insidious phenomenon crawling deeper even into our homes, schools, public offices and into our reunions.

People are struggling for dignity, respect and courtesy. Though oppressed, they are waiting endlessly for a God that will someday come to cheer them up. They cannot ride a bus or a train comfortably; they cannot sleep, eat, study or think ahead hopefully and peacefully. Indeed, it is too sad for one to study and still be jobless.

It is a disgrace that a country that has produced men like Ibn Battutta, Abdellah Laroui, Tahar Ben Jelloun and Taha Abderrahmane, among many other outstanding scholars of the caliber of Al-Jabiri, is unable to provide an efficient solution to the problem of joblessness. When you both stimulate and motivate middle school teenagers to study hard for exams, you are more likely to hear the common phrase, “But what did the graduates do with their studies? They are jobless, can’t you see? The illiterate are better off than them,” the students would add. That was a disturbing unwarranted answer, but unfortunately one that is taking over the minds of many Moroccan youths.

Parents who were futurists, allowed their children to ride deadly boats to Spain and Italy, – the Promised Land where people were going quickly from rags to riches. Whereas some were able to work and amass huge fortunes rapidly thanks to drug dealing. Maybe to hard work, others were obliged to study despite the gloomy future awaiting them. The layman would consequently associate studying with work. It’s a chickin and egg problem: we don’t know which comes first.

But let us make it clearer, “study” and “work” are two regular verbs overlapping in meaning. Simply, they cannot be separated!

You cannot enter a Moroccan house without finding someone unemployed – a jobless person capable of debating complex issues, demonstrating wittiness and good, common sense — much better than those whom luck had once favored. A census of the joblessness rate in Morocco is now needed more than ever. Let’s count and see what we can do about the issue.

Umar ibn al-Khattab, on whom the Prophet conferred the title of al-Faruq had the power to separate truth from falsehood, would usually inquire after the poor at night. There are many children that have not eaten anything the whole day. They have not worn new clothes for a long time. There are many elderly people, desolate, walking steadily, many widows, awfully distressed, begging and other outcasts who have known only misery, nothing else.

Back to the second Caliph. It is reported that while he was inspecting for the conditions of the poor around the medina, he came across some children who were crying. When he gently asked their mother about the reason, she replied that they were suffering the pangs of hunger. He then would ask her what she was preparing in a pot she had already put on the stove. To his surprise, he heard that they were pebbles boiled with water to keep the children quite until they were overcome by sleep. He would immediately rush to the treasury, bring some flour and oil on his back and start cooking himself and blew the fire with his own mouth. Aren’t we in a dire need of one thousand men like Umar?

We cannot speak of dignity, equity and social justice and many people have not had a delicious meal yet. We cannot claim equality between genders, races and some people are spending random huge amounts of money in Las Vegas casinos, acting out Shahrayar’s red nights in the best luxury hotels above a sea fluctuating with the wind and waves.

It is also a veritable disgrace to see billionaires playing with money ordering big bottles of Champagne, alcoholic beverages, gambling over Miss Luck, using up their money and their compatriots have never had any bottle of shampoo like their well-to-do cronies.

A penny handed to the needy will be so rewarding for these people. Isn’t our right to inquire on how much money those billionaires are devoting to charity and philanthropy work each year, each day?!

Their generosity is recommended by the divine law drafted up centuries ago. It’s a religious obligation, if ever implemented, that we will never be worrisome watching people living in penury, in the margin taking refuge inside bus stations, crying out in misery from roundabouts, passing by us naked with no clothes except for what covers the lower parts of their bodies.

Many families are so miserable that they cannot afford the cost of living and the schooling fees of their children. At an early age, these children are doomed to suffer, to work in the field, in snack shops and patisseries, and so on. The fortunate kids of some well-to-do people are sent to study with scholarships in the best European schools. Their parents are long-sighted. But they merely want their children to pick up some basics of politics mixed up with some French to come someday preach table etiquette on how to pour wine to five millimeters from the brim, how to date, how to dance the Can-Can, how to dress down, and be a high maintenance for their fellows.

Honestly, I feel disgusted when I see some youths, neither French nor Moroccan in our cities, uttering a mélange of words borrowed from schizophrenic lexicons. Their story is akin to that of the crow and the partridge. As he was extremely attracted by its beautiful walk, the crow resolved to emulate the partridge and ended up not knowing even his first walk.

On summer holidays, we are humiliated because we feel that these people sould speak French language much better than us. We were depressed that they would dress up more elegantly than us, exchanging smiles à la Française, stumbling while speaking Arabic to give the impression that a process of Frenchic-iz-ation has taken place. At that time, priority would always go to them whenever they dropped in on public institutions to apply for some legal documents.

We would frequently note that the administrators at the local municipality and the like, would die serving those people, satisfy their needs with much dedication. They weren’t asked to abide by the queue like us since hard currency was smiling up from their gorgeous full wallets, not ugly like ours.

The situation was worse with those illiterate immigrants living in Italy, accumulating lots of money in one month or two, coming back to run large corporations while showering money on their families to earn more satisfaction and eventually end up picking out the most beautiful girl in the town for what they presume as marriage. They would celebrate the wedding event in the most opulent way, invite celebrated popular singers and exaggerate a little to pay back dues of the past to their neighbors.

They would drive their brides to the big fountain, make a royal tour around, take some cheerful photos, slaughter many cows to satiate a childhood hunger and shamefully divorce those beautiful girls their mothers have carefully chosen for them during their truancy. How many girls they have had? Many!

They would drive faster their luxurious cars whenever they saw us and leave the dust alone to console and condole us. That was terrible indeed!