A verdict in the trial of a Tunisian television station director accused of insulting sacred values for having screened the Franco-Iranian film “Persepolis” is set for Thursday, court sources said.

Nabil Karoui’s Nessma television station broadcast the award-winning animated film, which recounts the Iranian revolution and its aftermath through the eyes of a young girl, on October 7 last year.

But it sparked outrage because of scenes depicting God, whose representation is banned in Islam.

Within two days of the broadcast, Islamic militants attacked the television station’s offices and Karoui’s home during violent demonstrations in Tunis.

“The judgment will be historic and will have an effect on the entire region,” Karoui said following a final hearing last week.

He added that the ruling would mark “a decisive day for freedom of expression and the press.”

A moderate Islamist party called Ennahda won the most seats in October elections, the first since Ben Ali fell.

While the party has assured it has no plans to create a extremist religious state, some have voiced fears the Islamist movements within the country, emboldened by the Ennahda victory, may try to restrict free expression and secular values. 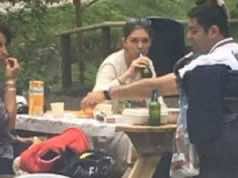