New York - Najat Vallaud Belkacem, a French woman of Moroccan origins, has been appointed on Wednesday, Minister of the Right of Women and spokesperson for the French government. 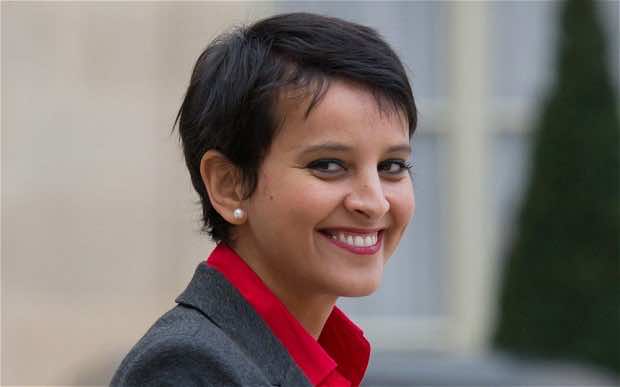 By
Adnane Bennis
-
Adnane Bennis is a national of Morocco, obtained his Bachelor’s Degree in Computer and Information Science from East west University in Chicago.
May 16, 2012
Spread the love

New York – Najat Vallaud Belkacem, a French woman of Moroccan origins, has been appointed on Wednesday, Minister of the Right of Women and spokesperson for the French government.

The announcement was made on Wednesday by Jean-Marc Ayrault, who was named by the Socialist Hollande on Tuesday, as new Prime Minister.

She will be part of a 34-member cabinet where most of the top-level posts will be held by men, including Laurent Fabious, former Prime Minister and Minister of Economy, who was appointed Minister of Foreign Affairs.

Between the two rounds of presidential elections, an UMP official , Valérie Rosso-Debord, had accused Vallaud Najat Belkacem of belonging to the  Council of the Moroccan Community Living Abroad  (known for its French acronym as CCME)  saying she was “ready to defend the Moroccan identity.”

“I am an elected official in the French Republic. The only ones that I must be accountable to today are the French people, whom I decided to devote myself to,” Najat was quoted by AFP as  saying.

Najat Vallaud-Belkacem was born in the Moroccan countryside in 1977 in Beni Chike, a village near Nador. In 1982, she rejoined her father, a French building worker, with her mother and elder sister Fatiha, and grew up in the suburbs of Amiens. She graduated from the Institut d’études politiques de Paris (“Paris Institute of Political Studies”) in 2002.

She joined the Socialist Party in 2002 and joined the team of Gérard Collomb, Senator/Mayor of Lyon, in 2003 leading actions to strengthen local democracy, the fight against discrimination, promotion of citizen rights, and access to employment and housing.

Elected to the Regional Council of Rhone-Alpes in 2004, she presides over the Culture Commission. In 2005, she became adviser to the Socialist Party. In 2005 and 2006 she was a columnist for the cultural programme C’est tout vu on Télé Lyon Municipale alongside Stéphane Cayrol.

In February 2007, she joined Ségolène Royal’s campaign team as a spokesperson, alongside Vincent Peillon and Arnaud Montebourg.

Najat Vallaud-Belkacem will be the second woman of Moroccan origin to hold a top-level post after Rachida Dati, who was appointed Minister of Justice under the right-wing government appointed by former President Nicolas Sarkozy in 2007.