An Algerian Islamist died in a Moroccan jail after a two-month hunger strike protesting torture and his living conditions, rights activists said Sunday.

Ahmed Ben Miloud was one of nearly 160 Islamist prisoners hunger striking for better conditions in prisons across this North African monarchy. He was serving a 20-year sentence after being convicted in December of using a firearm in the Algerian consulate in the Moroccan border town of Oujda.

He died on Thursday after 60 days of not eating in the Sale prison, near the capital Rabat.

“The efforts of his cellmates to save his life failed amid the indifference of the prison management and he died,” said Anas al-Halaoui, the spokesman for the Moroccan Association of Former Imprisoned Islamists.

Abdelilah Ben Abdesalam of the Moroccan Association for Human Rights also confirmed the death to The Associated Press.

There are around 700 Islamist detainees in Moroccan prisons, a number that has swollen due to a government crackdown following the Casablanca bombings in May 2003 that killed 41 people and wounded hundreds.

There has been no official comment on Ben Miloud’s death and the event has not been covered in the state media. Officials could not be reached for comment Sunday.

Morocco’s minister of justice, Mustapha Ramid, was a high-profile lawyer defending Islamist detainees before his moderate Islamist political party did well in November elections. Upon taking office, he met with human rights groups and promised to address the issue of Islamist detainees. 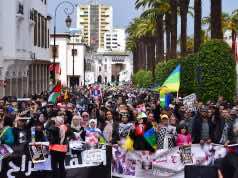