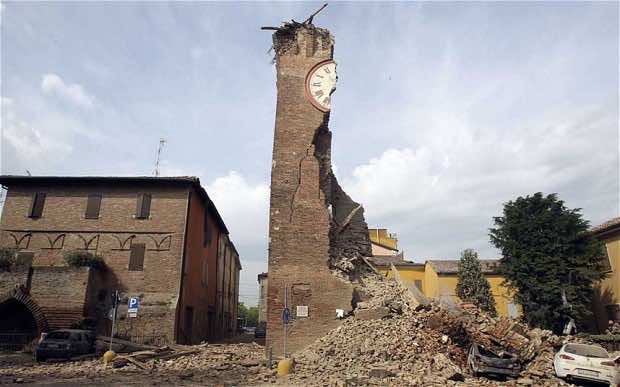 Residents of some small northern Italian towns hit by Sunday’s quake may have all survived, but the tremor that shook them to their foundations reduced their artistic and architectural riches to rubble.

San Felice Sul Panaro was just one town where the quake inflicted severe wounds on centuries of heritage, memory and tradition, in some cases erasing them.

“A thousand years of art has turned to dust,” was the headline in Monday’s La Repubblica newspaper.

The damage done to Italy’s artistic heritage was the greatest since a 1997 earthquake hit the central Umbria region and parts of the ceiling of the Basilica of St Francis in Assisi collapsed.

San Felice’s three main churches were in ruins and the town’s trademark Castle, La Rocca, was standing but wounded, perhaps fatally, by the 6.0 magnitude quake that hit Italy early on Sunday morning, killing seven people in other towns.

“It’s indescribable. There’s a lot of pain. La Rocca was our pride and joy,” resident Manuela Monelli said as she cast a mournful eye over what was left of the castle.

“And to think that we had been told that this was not a seismic area,” she said.

Started in 1332 by the Este family and enlarged in the following century, La Rocca housed a museum and was the town’s main tourist draw.

Only one of the castle’s four towers was left standing and a wide V-shaped crack in its brickwork suggested it too might fall.

“If it doesn’t come down by itself they’ll have to pull it down,” Monelli said.

“It is the symbol of our town,” said mayor Alberto Silvestri. “We have practically lost all our artistic heritage. Churches and towers collapsed. The theatre is still standing but has cracks.”

San Felice’s Church of the Archpriest practically imploded and is now only half its previous height.

“We are thankful there were no casualties,” said Simone Silvestri, a city council member, looking at the church surrounded by a sea of rubble.

Among the art works in the church, and presumably destroyed or severely damaged, was a triptych painted on wood by 16th century artist Bernardino Loschi depicting the Madonna, St Geminiano and St Felice.

Paintings from the 18th and 19th centuries used to adorn the sacristy.

Another strong symbol of the quake’s destructive force was the 14th century clock tower in nearby Finale Emilia. The first quake at 4:04 a.m. (0204 GMT) on Sunday split the tower in half vertically as if it had been hit by a meat cleaver.

“Our historic memory has been wiped out,” said town resident Elena Sergio.

Also in Finale Emilia, a section of San Carlo church collapsed. It contained a painting by 17th century artist Giovanni Francesco Barbieri, who was known as Il Guercino.

Despite the damage to churches, there was a sigh of relief throughout the area that the quake did not strike hours later, when the places of worship would have been full.

“Our school children were to receive their first communion here (Sunday morning),” said a priest in the nearby city of Mirandola, where the roof of the cathedral collapsed.

“If it had happened then, it would have been a disaster.”