Morocco plans to speed up tender processes for the development of a 2,000-megawatt solar energy plan, starting with the award this year of a first contract for 160 megawatts to be generated using concentrated-solar technology (CSP).

Mustafa Bakkoury, who chairs the Moroccan Agency for Solar Energy (Masen), said a winning consortium for that first phase of a 500-megawatt solar power plant, in the southern region of Ouarzazate, would be announced by the start of summer.

Ouarzazate’s 500-megawatt complex, which should be completed by 2015, is the first in the so-called Moroccan Solar Plan that aims to produce 2 GW of solar power by 2020, which corresponds to 38 percent of the country’s current installed power generation capacity.

“Works (on Ouarzazate’s first 160-megawatt phase) will start in the third or fourth quarter of 2012 and we aim to complete the work,” Bakkoury told the two-day Solar Maghreb conference in Casablanca. Masen will pick a winner for the 160-megawatt parabolic trough plant from the three following consortia:

– International Company for Water and Power (ACWA), Aries IS and TSK EE.

Masen will then launch tenders to build a 50-megawatt photovoltaic module and CSP towers of at least 50 megawatts, both of which in Ouarzazate, Bakkoury said. “We will be moving faster in the launch of Morocco’s Solar Plan projects … Our initial goal to have 2,000 megawatts from solar energy by 2020 is still on,” he said.

Morocco has embarked on one of the world’s biggest renewable energy development plans involving solar and wind power. The solar power plan is worth $9 billion in investment and will include five power stations, two of which are located in the disputed Western Sahara.

Facing an electricity demand that rises by an annual 7 percent and a gaping trade deficit from heavy reliance on fossil fuel imports, Morocco also bets renewable energies would enable it to export electricity to energy-hungry trade partner, the European Union.

Morocco aims to export surplus electricity to Europe via Spain, where it has a power market trading licence that allows it to sell electricity.

“We expect energy demand to double by 2020 and then to quadruple by 2030,” said Taoufik Laabi, head of planning and strategy at power utility ONE. He noted that the percentage of solar-generated electricity that will be exported would depend on “availability of surpluses”.

Pending a drop in the high production costs of solar plants, the Moroccan government will cover any gap between the cost of producing solar electricity and the price ONE pays to buy the electricity from Masen, said Masen’s Bakkoury.

“The costs are high but we think they will be declining going forward … Developing solar power is an irreversible choice for us,” said Bakkoury. “I hope we will not rely on public funding for too long,” he added. 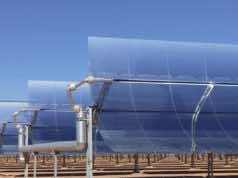