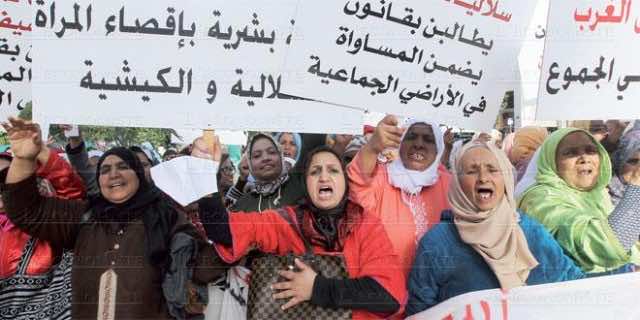 Rabat – It all began when her father died.  Rkia, who has eight brothers, was the only one not to have received anything from the money the family earned when they sold their communal land.

She had no right to the family’s land because; the “Orf” (Moroccan customary law which applies to communal land) states that women can’t possess lands and the passing goes only from father to son.

Rkia Bellot says that her feelings of injustice and humiliation were indescribable, but that’s also what induced her will to fight for what she says are her rights. Now, she is the forerunner and spokeswoman of what is called the Soulaliyate land rights movement that started out from Kenitra to include all Morocco.

“There is a big confusion in men’s mind between Islam and “Orf”, they actually think that Islam established the passing of lands in a way that marginalizes women which is opposite to Muslim Inheritance Laws.” says Bellot.

Bellot and Mennana Shiseh (another Soulaliyate woman) won the Moroccan people’s vote for the Khmissa’s Award in the Social and Humanitarian Action category in 2009.  They won on behalf of all Soulaliyate women in Morocco who joined together in advocating for their right to equality with men in compensation for collective lands.

The first demonstrations took place in 2007, with the aid of the Association Démocratique des Femmes du Maroc (ADFM)

“Basically what we do is supervise the Soulaliyate women through a daily follow-up, we offer them training sessions and we organize leadership and communication workshops so that their demands can be met especially since that most of them are illiterate” says Khadija OueddaMmou, who is in charge of all Soulaliyate issues at the ADFM office in Rabat.

Morocco’s communal lands belong to 4,631 tribes, amounting to about 10 million people. The Jmâas (tribes) are governed by ancient laws that that go way back in time, before Islam was introduced to Morocco in the seventh century.

Under such rules, women are not entitled to own land, with only lands passing from father to son.

This was part of a royal Dahir/decree issued in April 27, 1919 that governs the inheritance of communal lands. It’s a decree that Rkia Bellot calls “unconstitutional”.

“Morocco finds itself in a very contradictory position, on one hand the kingdom signed all of the international conventions that call on men and women equality, human rights and so on and on the other hand women still have no right to their own lands” Says Rkia.

The sharing of an inheritance is decided by an assembly of delegates, under state supervision.

The ministry of Interior is responsible for land held by ethnic groups, the communal lands can neither be sold nor seized but they can be transferred only to male family members over the age of 16.

Having nowhere to go, many women were forced to move to one of the shanty towns, beside the former collective lands

Rkia Bellot carries on, in tears: “it wasn’t always like this, long ago, men would help their sisters, they would provide for them but nowadays, men are individualists, they’re selfish, they take the land and turn their back on their families.”

However in 2009, the Soulaliyate women got good news as the Ministry of Interior issued a circular recognizing the right of these women to receive equal compensation from the sale of communal land.  But this circular isn’t always enforced, says Bellot.

“In theory, it’s an advance but in reality, women face the same problem,” she says.  “They have no right to their land, as the authorities work in connivance with men.”

And what would be the solution to this issue? Rkia thinks that there should be a clear political will to solve the issue and emphasizes the role of raising people’s awareness of the law and their rights “That’s the high-stake challenge” she asserts.

At 66 years old, this former state employee of the Ministry of Finance confesses being tired, but says she isn’t giving up the fight for the Soulaliyate women

“I feel like I have to defend them,” she says.  “I don’t expect something in return because I’m in a better place in comparison to them. All I want is men and women to be equal. Is that too much to ask?”

Stacy Wheeler contributed to this story.