French writer and philosopher Bernard-Henri Levy will stride the red carpet at Cannes Friday with four Libyan rebels for the premiere of his documentary on the Libyan war, “The Oath of Tobruk”.

Levy, who was instrumental in persuading France to actively support the rebellion, made the film both to chronicle the struggle against Moamer Kadhafi and to pay homage to his father, who fought in Libya with the free French forces during World War II.

The title echoes the “oath of Kufra” that Colonel Philippe Leclerc’s troops in southern Libya took on March 2, 1941 not to put their guns down until “our colours, our beautiful colours, fly over Strasbourg cathedral” in northern France.

In the film, Levy and journalist Gilles Hertzog walk with four leaders of the anti-Kadhafi rebellion through a cemetery in the north Libyan port city of Tobruk where 180 free French soldiers are buried.

It is April 2011, the middle of the revolution. In a wide-angle shot, the six men swear beneath the Cross of Lorraine, the symbol of the free French forces, “not to separate as long as Libya is not on the road to democracy.”

Levy, France’s most telegenic philosopher, spent the eight months of the war with the insurgents, as well as journalists and political leaders, playing the role of participant observer.

“I wanted to document the piece of history in which I was a witness, and an actor,” he told AFP in Paris before the premiere.

Levy’s direct involvement in the struggle reached its most potent with a satellite phone call he made from Benghazi to then-French president Nicolas Sarkozy, and it is one of the film’s most potent scenes.

“I’m calling you to propose you meet them. It’s a major political move, you know that better than me. It would mean recognising them,” he tells Sarkozy, whom he calls a friend.

“If we want to stop the massacre, we need to bomb the airports and meet a delegation from the Libyan national council. It will be a political thunderbolt.”

Levy, who spent the spring criss-crossing the country, scribbles battle plans and weapon requests for Sarkozy on scraps of paper.

“This film has two themes: brotherhood and memory,” Levy said. “I loved, I still love, these women and men.

“And all that time I was cherishing the memory of my dad as a young free French fighter, who came to Libya’s sands before me. What a feeling!”

Levy plans to dedicate the film to Syria’s rebels when it screens at Cannes.

Besides the four Libyan rebels, he will also walk the red carpet with two Syrian opposition figures who recently fled the bloody crackdown by President Bashar al-Assad’s government against the uprising that kicked off there in March 2011.

The Syrians plan to attend the event with their faces covered by “free Syria” flags to disguise themselves and protect their families in Syria from retaliation.

When the two rebel groups met Thursday, Libyan Suliman Fortia told the Syrians: “Bernard-Henri Levy was the first to come to Libya. What happened there happened thanks to him, because he knows Sarkozy. 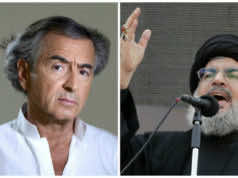 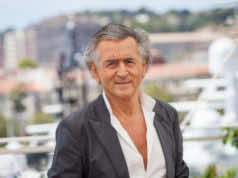