In the wake of Muslim occupation of Spain, Spanish chroniclers began telling a story of Moroccans' inferiority to boost Spanish interest in Moroccan intervention. 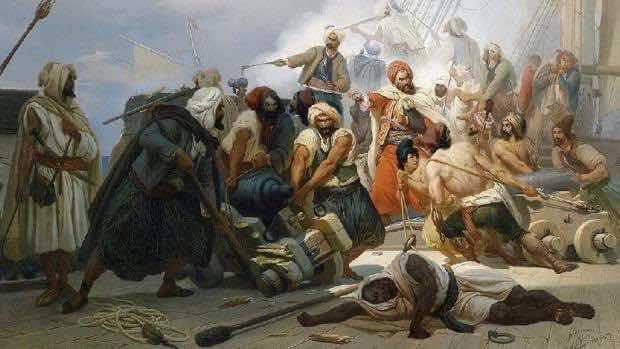 New York – There is no doubt that the negative Spanish views of Moroccans have historical roots in the rivalry that prevailed between Morocco and Spain since the end of the Muslim presence in Andalusia. In this confrontation, religion played an important role in both sides’ denigration of the other.

Why have Spaniards had a demeaning image of Moroccans up until the 20th century? It has a lot to do with the image that Spanish writers, theologians, travelers, and prisoners circulated about Moroccans during the 16th and 17th centuries.

I believe that knowing this is fundamental to understanding the reasons for persisting prejudices and cliches about Moroccans. In the view of all writers on Moroccan-Spanish relations, false stereotypes on both sides caused today’s misunderstanding and mistrust between the two peoples. Each country spread denigrating views of the other to assert the superiority of its religion.

Spaniards demeaned Moroccans since they sought to end the Muslim presence in Spain. The first step they took to downplay their Arab Muslim past was to highlight their “superiority” over Muslims. In doing so, they set anti-Muslim propaganda in motion. Moroccans, like the Turks, became the target of attacks from Spanish chroniclers, theologians, and travelers.

Spanish chroniclers’ propaganda campaigns came within the framework of Spain’s expansionist plans. But it also came during a time of religious and political rivalry between Islam and Christendom and followed the human and material devastation Moroccan pirates inflicted on Spain. Moroccans had used piracy to effectively terrorize Spanish populations and weaken Spain.

To preserve Spanish possessions in Muslim lands from Moroccan attacks and prepare for a possible intervention in Morocco, Spain attacked the religious doctrine of its enemies, the “infidels.” By demonizing and dehumanizing Muslims, Spain justified its military action. Such military action was allegedly to “civilize” the peoples of this land, bring them back to the “true” religion and recover the African territories, lost to Christendom since the arrival of Islam.

The Spanish monarchy had four ultimate goals: To defend their territories in Morocco (Melilla and Ceuta occupied by Spain in 1497 and 1648), to prevent a potential invasion of Moroccans, to wield influence and hegemony in Morocco, and to counterbalance the thrust of the Ottomans in the Mediterranean.

To secure public opinion on the duty of Spaniards to maintain a presence in Morocco, Spain presented Islam and Christianity as irreconcilable. On the pretext that the moral and religious systems were antagonistic, Spanish leaders mobilized Spaniards to support intervention in Morocco.

First, zealous Spaniards vilified the lifestyle and value system of Moroccans, asserting the superiority of Christianity over Islam. Spanish officials then had to define why Muslims were inferior and dangerous. Assuming that Christianity was the only way of salvation, they presented Islam as a “false,” “irrational,” “immoral,” and “bloodthirsty” religion.

Second, to emphasize the supposed inferiority of Islam, Spanish clerics tended to explain to their fellow Christians Muslims were “barbaric,” “savage,” and backward because of the essence of their religion. They said Islam instilled in its followers “irrational and reprehensible” values.

By investing themselves with the moral duty to bring civilization and salvation to free the “poor savages” from their “barbarism” and primitive life, Spanish chroniclers embarked on a propaganda campaign against Islam. The echo of that campaign still resonates today in Spanish public opinion. Spain spared no aspect of Islam or the daily lives of Muslims, especially Moroccans, in its vilification campaign.

At that time, Spaniards seemed convinced of their superiority over Arab Muslims. They then could not understand how the “uncivilized” and “wild” Arab Muslims, who were “inferior” both economically and militarily, had been able to conquer Spain and stay for eight centuries.

As their superiority was taking root in Spanish collective memory and hostility increased, Spanish chroniclers began trying to “study” the lives of their neighboring enemies.

In parallel to disparaging Islam, Spanish chroniclers attacked aspects of Moroccan customs. For most Spaniards of the time, the best reflection of Moroccans’ hardiness and brutality was the ramshackle appearance of their homes, their way of dressing and eating, etc. The writers also emphasized the alleged aggressiveness of Moroccans, their treachery, their propensity to theft, and their lack of courage.

Moreover, Spaniards’ common view of Moroccans was that they were greedy. According to Spanish chroniclers, greed and superstition prevented Moroccans from enjoying life. Additionally, their idleness was diametrically opposed to reason.

Because Spanish chroniclers portrayed Islam to justify their expansionist enterprise, ordinary Spaniards could only regard Moroccans as evil, lying, fickle, superstitious or lazy. In short, Moroccans were everything contrary to the Spanish value system.

Spaniards had built their identity in opposition to the other, the Arab, the Muslim, the Moroccan “infidel,” “traitor,” etc. Even today, this construction of Spanish identity causes Spaniards to disdain Islamic and Arab cultures and to believe in the “superiority” of their religion and culture.

It is no wonder then that Moroccans continue to be the most hated and distrusted people in Spain as shown by the latest poll, conducted in April, by the Spanish Real Instituto Elcano.

Samir Bennis is the co-founder and editor-in-chief of Morocco World News. You can follow him on Twitter @SamirBennis