Morocco World News
Home Highlights on Morocco “Get out Eric Gerets”: Mohamed Zaman Resigned from Al Oula because of...

According to daily newspaper Al Massae, the chief editor of Al Oula sports section, Moahmed Zaman, resigned from his post in protest over censorship. He told Al Massae that the reason behind his resignation was the omission of a footage from a reportage he prepared about Morocco’s latest football match against Ivory Coast on June 9, which ended with a 2-2 draw. The footage shows some Moroccan fans, during the football match, carrying a banner reading, “Get out, Eric Gerets!”.

Mohamed Zaman went on to say that it’s the chairman of Al Oula sports sector that deleted the footage on the grounds that there were instructions from high circles of power that prevented them from being critical of both Eric Gerets and Ali El Fasi Elfihri, the coach of the Moroccan national football team and the President of the “Fédération Royale Marocaine de Football”, respectively.

Moroccan fans have repeatedly expressed their disgruntlement with the presence of Eric Gerets at the helm of the Moroccan national football team, especially after the team’s disappointing results  both in the African Cup of Nations held last winter in Gabon and Equatorial Guinea and at the start of the World Cup qualifiers. 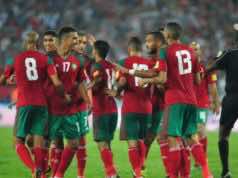 CAN 2019: Morocco Officially Qualified as Malawi Fails to Beat Comoros