“Those whom we wanted to kill maybe the ones who save our lives.”

The controversial issue of a woman’s right to abortion has generated heated debate in Morocco, with people positing passionate arguments to support or decry the practice. This polarizing issue reminded me of a true story of one of my mother’s friends.

The woman, a neighbor of ours, was poor and married to a man who earned a meager wage as a construction worker. She and her husband had five children, with another on the way.  Because of her family’s poverty, she seriously considered getting an abortion. As she explained to my mother, she and her struggling husband would face extreme difficulty in providing for six children.

My mother did not hesitate to express her displeasure with her neighbor’s intentions. Without mincing words, my mother told her friend that abortion is a criminal act and that a truly caring mother would never kill her own baby. She reminded her that God does not forgive the unjustifiable killing of a soul, especially the one of an innocent baby.  As she told her friend, “how can we make God angry and furious just to please a human being?”  My mother also explained the societal consequences that her friend would face, including loss of trust by her husband and her potential label as a killer.  Finally, she addressed the psychological costs whereby her friend would always see herself as a criminal.

My mother’s response had a profound influence on her neighbor. After much contemplation, she decided not to abort the fetus, and five months later, she gave birth to a healthy baby boy named Salem.  At the age of 15, Salem immigrated to Las Palmas where a Spanish Humanitarian Organization helped him learn Spanish, develop skills as a hair stylist and obtain his legal residency documents. After returning home for a brief visit, Salem formally applied for his family to join him in Las Palmas.  A few years later, Salem’s parents and siblings moved to Las Palmas where his father secured a well-paid job in construction.  Salem’s family was finally able to enjoy a comfortable lifestyle where they did not have to worry about affording food, housing, and clothing.

After a few years abroad, Salem’s family returned home where they could afford the luxury of a nice car and home. Our old neighbor showed up at our home and thanked my mother for her earlier intervention. As she told my mother, “there are angels in the form of humans whom God sends to us at bad moments to prevent us from doing bad things.” She never imagined that the boy whom she considered aborting would be the one to move her and her family out of poverty.  She told my mother, “those whom we want to kill, are the ones who will save our lives”

I recount this story because it makes me extremely proud of my mother and of all the mothers who carried us in their wombs, cared for us after birth, nurtured us until we became independent, loves us unconditionally, and sacrifice for us even in their old age.  God bless our mothers. 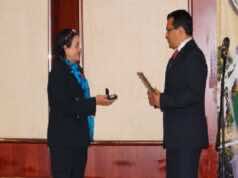