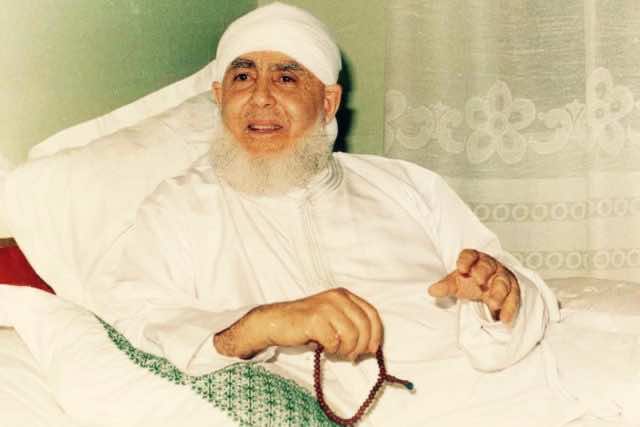 Beni Mellal – At a time when almost all human beings seem to be both agitated and perplexed – spiritually disordered – torn apart between a wide range of materialistic concerns and selves, either thirsty for fame or glory, fortune or festive enjoyment, Sidi Al-Haj Hamza is settling in his Zawya in Nai’ma village located near Oujda beseeching the Lord to safeguard humanity from wars and military conflicts.

And if the majority is hankering after money and power, in the realms of business and politics, Sidi Al-Haj Hamza has renounced all worldly allurements and has put his whole focus on purging the souls of followers, cleansing their hearts from evils through spiritual instruction, having as a primary precept, «Love all human beings with no distinction. Hate not anybody!  People are the door to God’s mercy. They are the key to triumph. »

Talking about this man demands a careful attention to one’s words. Honesty with oneself while depicting this formidable human reality, astounding a large number of people, startling the mundane and the intellectual, the male and the female alike. It demands purity while summing up a thoroughgoing divine essence in the common language. Even objectivity is required while transcribing this long mystic experience under the auspices of this living Sufi Master, the embodiment par excellence of  beauty,  modesty and sanctity.

This is not a commonplace person, or a superstar who loves showing up in national and international TV shows. Superstars themselves, and by nature, are not the same. Indeed, huge discrepancies reside in them when it comes to ethics and aesthetical values. He is not a Prophet. He cannot be. Prophethood has ended with the Sealed Nectar Mohammed (Peace and Prayer be upon him!). Neither, he is an occasional preacher so fond of his religious sermons and speeches. Far from it.

Sidi Al-Haj Hamza is a candle lightening people in a dark room. He is a beautiful blossom scenting the whole spiritual garden. A moon illuminating one hemisphere of earth. An open book full of divine mysteries and sweet-sounding melodies. A very awesome painting startling the painter and even the observer.

Those who have known him in person can tell much of him. Those who did not see him have to love him. He is all the time praying for all people, pleading God’s pardon to vouchsafe humanity and guidance to encompass all.

If you allow me, I will characterize him as a noble servant having some properties of Bahira, a very open-minded Muslim, so hospitable that you never feel alien in his presence. The first look at him alters your whole being; it tells much about his basic mystic essence and the message he is upholding. This man could but be a truthful man, entirely surrendering himself to the divine.

Seldom does he speak. And if he speaks, his words go immediately to the heart. They are to the point, and very concise, having a ground in human logic and also in common sense. He might be closing his eyes some time, seemingly asleep, but he is in fact wakeful. He can read one’s ideas before being uttered. This is not magic; rather, it is clairvoyance bestowed on him, a token of good faith and rightfulness.

Remarkable of him is his unfailing involvement in the Dhikr, literally God’s remembrance. His dazzling face indicates unmatched wisdom harking back to the Prophet and his blessed companions, the universal harmony one may aspire to, the physical and spiritual balance we all dream to achieve.

He is truly the most passionate mystic in contemporary history. His manners denote the great esteem a human should have towards creatures. He is a fabulous man; human language cannot encompass his whole person dripping of the divine. He is an heir to the Prophet of Islam by spiritual genealogy and blood.

He is an extraordinary social reformer, educating individuals, contributing to their well being and inculcating many virtues in them with much flexibility and understanding.

He is the beacon of love and peace in our world, fraternizing Arabs and non Arabs, Muslims and non Muslims in such a mysterious way. He is redolent of great masters like Imam Al-Junayd, Ibn Arabi, Rumi, among many other outstanding mystics, who had argued for interreligious dialogues centuries ago.

I may seem a little subjective when speaking of Sidi Al-Haj Hamza. Let it be. Subjectivity is inevitable in discourse. It is desirable as it shows an angle from which we behold truth and originality commensurate with our grasp of things. Besides, subjectivity is recommended when both theory and practice confirm it.

Now, shall I borrow Shakespeare’s sonnets or Plato’s philosophical dialogues, Aristotle’s rhetoric or Aesop’s fables to give a full portrait of this alive Sufi Saint, whose silence works deeper into his visitors.

He might be sitting in one corner in utter modesty, but you feel he is speaking inside you, kindly addressing you, shaking your whole body with no word, imparting to you some divine light you come across whilst reading a given Qur’anic verse, or reiterating a particular formula of Dhikr submissively and heartfully.

Thanks to Sidi Al-Haj Hamza, lots of criminals have become good men. Lots of delinquents have come back to the right path and turned righteous. Lots of students outperformed their peers in school subjects. His disciples have grasped his noble message and felt much internal stillness under his wings.

Such guidance Sidi Al-Haj Hamza is communicating to the world has been inspired by a strict adherence to the Prophetic Tradition based on the Sunnah and the refinement of one’s conduct, hard work as well as great efforts in doing the religious duties perfectly under the supervision of his former masters, namely his father Sidi Al-Haj Al-Abbas, Sidi Abou Madyan, and Sidi Al-Mokhtar Al-Boutshishi, an emblematic figure of resistance against colonial invasion.

Similarly, it has been blessed by the Almighty’s presence in the heart of the believer. This presence occurs when the spiritual link is established between the student and his beloved master.

Sidi Al-Haj Hamza is like a fountain cascading esoteric and exoteric knowledge to people of all races and colors. If ever he fixes his eyes on you, then be blessed. He is repairing the engine and washing up the dirt inside you.

He is by no means the quintessential of generosity. His Zawya is housing many have-nots, poor children, sheltering many families, endowing both the young and the elderly with all good qualities we can think of.

If ever he shows up to people, the latter’s souls jump up out of extreme ecstasy and happiness, longing for liberation from this cage of instincts and, most significantly, seeking communion with the divine.

But if he is absent from the gathering, and he will never be, his soul turns around people irrigating their thirst for purification and purgation. Then, you feel as if he is holding a cup of love handing it out to the attendees, who have no way but to thank deeply Sidi Al-Haj Hamza for that love.

As a realized Sufi Saint, combining between inner and outer sciences, Sidi Al-Haj Hamza managed to make of Morocco a real destination for true Sufism and spiritual education. On any religious celebration, like the Holy Month of Ramadan, the Prophet’s Birthday Feast, and also in other occasions, many people from all parts of Morocco and the world come to visit this spiritual master. In so doing, they revived their hearts and orientated them to the sun of truth, the pole of his time, Sidi Al-Haj Hamza (May Allah outstay him!).