Ifrane, Morocco - Tea is a plant that was first discovered in Southeast Asia. The tea brewed from the dried leaves of this plant has been consumed in china since perhaps 2738 B.C, when it was discovered by the Chinese Emperor, Shen Nung, while visiting a distant region of his empire.

Ifrane, Morocco – Tea is a plant that was first discovered in Southeast Asia. The tea brewed from the dried leaves of this plant has been consumed in china since perhaps 2738 B.C, when it was discovered by the Chinese Emperor, Shen Nung, while visiting a distant region of his empire.

It was brought to Europe by the Dutch in 1657 and to America by the Spanish and the Portuguese in the 18th century. However, in Morocco the history of tea, or ( Athay) as the Moroccan call it, is still debated according to historians. In this paper, I will tackle this problematic, dealing at the same time with its importance within Moroccan society.

The history of Moroccan tea is attributed to several sources. It is believed that Moroccan tea was first introduced to Morocco in the 12th century B.C by the Phoenicians who settled in the north of the country for more than eight centuries. Another hypotheses links it to the first settlers of Morocco, the Berbers, who brought that green Plant with them when they moved from their original land in Asi.

Also, another historical theory said that tea came to Morocco from Spain and Portuguese at the time of their military attempts to conquer it in the 18th century. Besides, some historians thinks that tea was first known to Moroccans through maritime piracy (maritime jihad), that was active at that time in both the Atlantic ocean and the Mediterranean.

These historian said that Moroccan pirates seized a cargo of ship that was loaded with tea. Nevertheless, this does not please some people, who assert that tea began to be known in Morocco and Moroccan cuisine only in the mid-1800s century, coinciding with the flourishing of mutual trade between Morocco and Europe.

More than that, other historians go beyond that reporting that the king Moulay Ismail received many bags of green tea as a tribute from the queen of Britain after releasing some European prisoners. No matter how or when it was first it was brought to the country, Moroccan tea remains a fantastic drink that gives more zest to Moroccan cuisine. 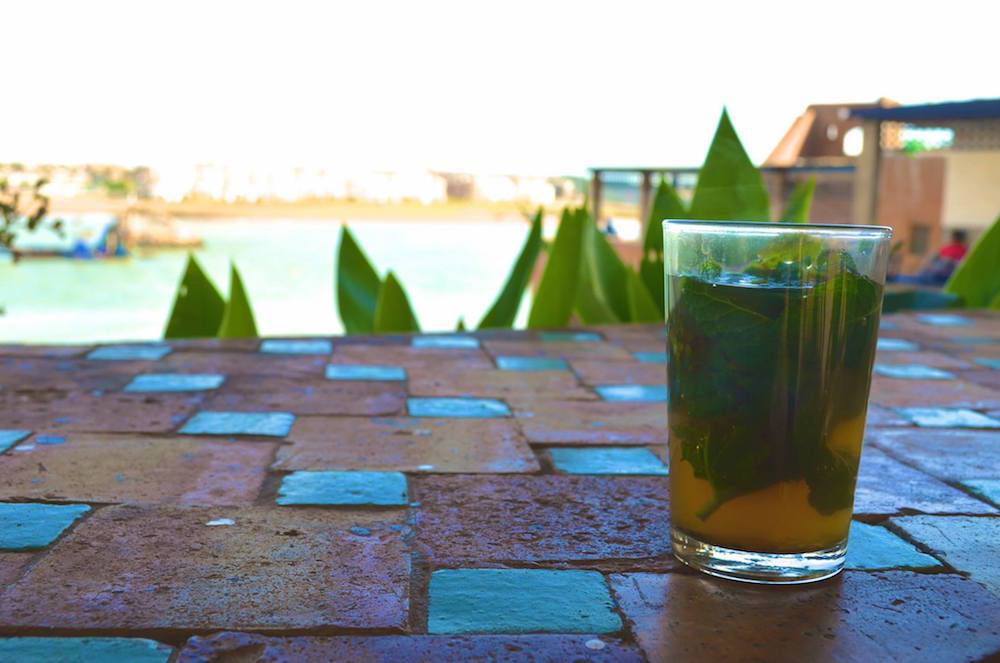 Moroccan tea, as in many other Arabian countries, occupies a very important place within Moroccan cuisine and culture for its symbolic values to the extent that Morocco has become one of the biggest tea importers in the world ($88 millions, 2006).

Having learnt the custom of drinking and making tea from their ancestors, Moroccans took tea as a sacred drink, around which they compete each with other to prepare the best cup of tea, that you have never tasted elsewhere. Indeed, It has become an art. In order to reach artistry of making tea, you should be genius enough to prepare a mouth-watering cup of tea.

You will not get away fro the same milieu without drinking a teapot or two since wherever you go, either to restaurants or to shops or to buy something, or to offices, or to pay a visit to a Moroccan friend, tea is your heavenly drink.

Drinking tea in Morocco is a social rite that necessitates certain special environment. At a Moroccan tea drinking occasion incense is lit to refresh the surrounding air. This will make you immerse in a sacrificial religious ceremony as though you are in an oriental saint tomb or in an Anglican or Catholic or Orthodox churches, rather than in a Moroccan restaurant or café.

In addition to incense, anyone attending a Moroccan tea drinking ceremony in a Mourish-Andalusian restaurants, will experience something he had never seen as a part of the ceremony of sipping tea; before he drink his cup of tea he will be given an orange blossom water to wash his hands in order to feel the real taste of Moroccan tea.

To complete the general atmosphere of that rite, here, with a haunting Arab music as a background, they present to you your cup of tea so as to reach the trance once you are sipping  it. All these things reflect the greatness of Moroccan cuisine, as Paula Wolfert, in her book about Moroccan cuisine entitled: Couscous and the Other Good Foods from Morocco, reported. Thus, drinking a Moroccan tea in a similar atmosphere, the guest will think himself in the host of Scheherazade and Aladdin.