Casablanca - Last month at Al Azhar University, Sheikh Mustapha Mohamed Rashed defended a thesis that sparked a heated debate among religious scholars. The candidate concluded that Hijab, or the veil, is not an Islamic duty.

Casablanca – Last month at Al Azhar University, Sheikh Mustapha Mohamed Rashed defended a thesis that sparked a heated debate among religious scholars. The candidate concluded that Hijab, or the veil, is not an Islamic duty.

The claim is not the first of its kind, but the mere fact that it is adopted in Al Azhar University – the Sunni Islam’s foremost seat of learning –makes it controversial.

Sheikh Mustapha Mohamed Rashed argued that Hijab is not an Islamic duty. He stated that Hijab refers to the cover of the head, which is not mentioned in the Holy Quran at all. “Nonetheless, a bunch of scholars insisted vehemently that the veil is both an Islamic duty and one of the most important pillars of Islam,” he added.

In doing so, the PhD candidate points out, “they deviated from the purposes of the Islamic law and “Sahih Atafsir” or the true interpretation. They rejected reasoning and relied only on literal text.”

According to Mohamed Rashed, these scholars de-contextualized the verses of the Quran and interpreted them in their very own liking, following some ancient scholars, as if what they said is sacred and is no subject to Ijtihad.

Ijtihad is a technical term, which literally means “exertion” in a jurisprudential sense; it is the exertion of mental energy by a Muslim jurist to deduce legal rulings from Islam’s sacred texts.

The researcher continued that the scholars, who claim that Hijab is an important pillar of Islam, departed from “Al Minhaj Assahih,” or the true path, of interpretation and reasoning, which interprets the verses according to their historical context and the causes of revelation. These scholars  “interpreted the verses in their general sense, overlooking the causes of their revelation, intentionally or due to their limited intellectual capacity resulted in psychological scourge.” Worse yet, they approached hundreds of important issues in the same way.”

“The supporters of Hijab as an Islamic duty base their arguments on inconsistent and wrong evidence. They would ascribe various meanings to the veil, from Hijab to Khimar to Jalabib, a fact which shows that they digressed from the true meaning they intended to address, the cover of the head,” he added. The researcher attempted to deconstruct the three claims that are derived from interpretations of the sacred texts.

Literally, Hijab means “a veil,” “curtain,” “partition” or “separation.”1 The verse in which it is mentioned is specifically addressed to the wives of the prophet; there is no dispute among scholars about that at all. The verse states as follow,

And when you ask [his wives] for something, ask them from behind a partition ( hijab). That is purer for your hearts and their hearts. And it is not [conceivable or lawful] for you to harm the Messenger of Allah or to marry his wives after him, ever. Indeed, that would be in the sight of Allah an enormity. ( Quran 33: 53)

The term hijab then is meant to have a partition between the wives of the prophet and his companions. It is not addressed to the Muslim women, otherwise it would have been stated, says Mohamed Rashed.

Bouthaina Shaaban seems to have held the same belief.3She said that those who imitate the wives of the prophet and wear the Hijab are disobeying God’s will, for He said,

As for the term Khimar, it is found in a verse of the Quran stating,

And tell the believing women to reduce [some] of their vision and guard their private parts and not expose their adornment except that which [necessarily] appears thereof and to wrap [a portion of] their headcovers over their chests. (Quran 24: 31)

The researcher pointed out that the evidence is invalid. The intent of the text is to refer to the cover of the breast whose exposure is un-Islamic, but not to what is perceived nowadays as Hijab for the head.

In this regard, it is believed that when the pre-Islamic Arabs went to battle, Arab women seeing the men off to war would bare their breasts to encourage them to fight; or they would do so at the battle itself, as in the case of the Meccan women led by Hind at the Battle of Uhud.2

Nikkie Keddie, a prominent historian and an expert on women’s issues in Islam, said that this verse does not refer to covering the hair. It was only “later interpreted as meaning covering the whole body, including the hair, and most of the face.” She continued that; “This interpretation is illogical. If the whole body and face were meant, there would be no reason to tell women to veil their bosoms specifically, while the later interpretation of ‘adornment’ to mean everything but the hands, feet, and (possibly) the face is a forced one.

However, Al Qaradawi, a famous Egyptian scholar, quoted the same verse to conclude that the Hijab is  compulsory and is an injunction  based on a literal reading of the Koran. He asserted that the Hijab is, “not the result of an opinion by jurists or even by Muslims; it is a Koranic order.”3

As regards the verse in which Jalabib is mentioned, the researcher considered it to be misplaced evidence.

O Prophet, tell your wives and your daughters and the women of the believers to bring down over themselves [part] of their outer garments. That is more suitable that they will be known and not be abused. (Quran 33:59)

The supporters of Hijab as an Islamic duty overlooked the historical background and the cause of revelation, for the verse was meant to distinguish between the pure and promiscuous women and slaves. At that time, all women tended not to cover their faces. Hence, the verse was revealed so as to protect the pure from some men, who would gaze at them while they were excreting or urinating.

Mustapha Mohamed Rashed rejected the Hadith, reported by Abu Dawud, in which Asma, daughter of Abu Bakr, was ordered by the prophet to expose only her face and palms. He says it should not be taken into any sort of consideration because it is “Ahaad” or its narration does not fulfill one of the most important required conditions, connectivity.

It is not clear whether the dissertation was preserved on the shelves of Al Azhar University and could not be discussed. This possibility made the Moroccan newspaper, Almassaa, wonder if the Arab Spring was conducive in bringing this issue to the surface.

Update to the article:

Al Azhar University published a statement in June 2012, denying the claims that one of its scholars had defended a thesis that concluded that Hijab, or the veil, is not an Islamic duty. 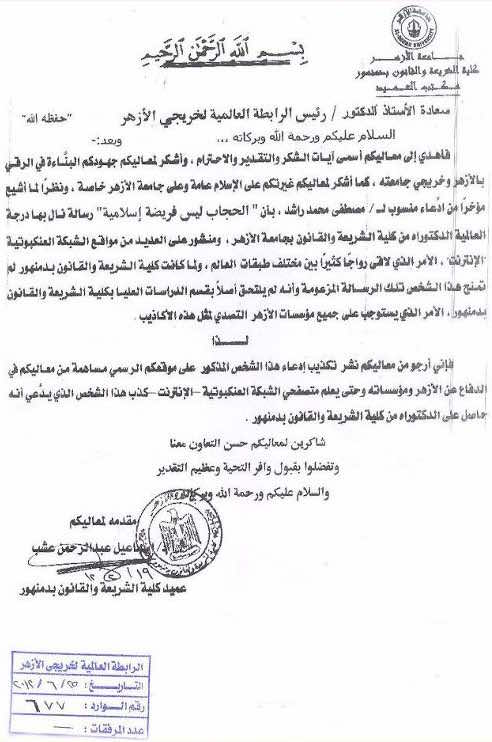