Taroudant, Morocco- In our daily life, we are subject to various shifts in our personality's moods. 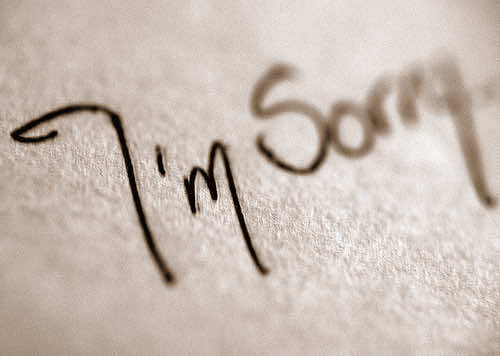 By
Larbi Arbaoui
-
Larbi is a freelance writer and assistant editor at Morocco World News.
Jul 3, 2012
Spread the love

Taroudant, Morocco- In our daily life, we are subject to various shifts in our personality’s moods.

Most of the time we’re driven by our emotions; and logical reasoning is the last thing we resort to when a problem arises in a relationship. We usually deal with our problems through our feelings, but feelings are often misleading and generally lead to amplifying the inner and egotistical side of a person. The feelings that may result from an attempt to express an apology to a woman is painful in oriental culture, and may invoke a sense of debasement for some men.  But does this give men an excuse to ignore the feelings of women, hurt their feelings, transgress their rights and even step on their dignity? It is up to every reader to reflect on how he would feel, as a wrong-doer, when he has to express apologies to a woman, and to put oneself in the position of the wronged woman, waiting for a gesture of remorse that never comes.

The best way to begin the process of healing the rupture and rebuilding trust is for the wrongdoer to offer a sincere apology. However, “apology” is never as simple as the three words “I am sorry”. Unfortunately, some men do not only lack the technical ways of expressing their apologies, but they also tend to view apologies to women as a sign of weak character that is likely to deprive them of their dignity and high self respect. Instead of assuming the responsibility of their wrong deeds and rude behaviors, they seem to lay the blame on the other party. Even though they may admit to their selves that they are to blame, but to bow before their women and express their apologies is an act that seems sadly a far cry from reality, all as if they are in a perpetual war with winners and losers.  The only losers are the men unable to do this, to express their contrition.

In our culture, many interwoven factors are behind the stiffness to express apology to a woman. In a society where familial ties are very close, the misunderstanding that may rise between a man and his wife, a girl and her brother or between members of the family is hardly to be kept among the two persons in question. Once a simple problem happens between a husband and wife, all the rest of the family get involved. Dismally, the problem goes from bad to worse just in a matter of days. The mother advises her daughter not to apologize to her husband so that he wouldn’t develop too much self-importance and arrogance. The father in turn may bar his son from apologizing to his wife on the belief that “Mol Ddar”, the master in charge of the family, never apologizes to a woman.

However, getting rid of these destructive ideas have to be the priority of everyone who aims to participate in building a cohesive society, one that maintains the rights and dignity of both parties. By apologizing and taking responsibility for our actions we help rid ourselves of esteem-robbing, self-reproach and guilt. We need to learn that expressing our apologies, as wrongdoers, is never a source of humiliation, but rather a bold act that is one of the most profound interactions of civilized people. A word “sorry” that comes from the heart is more powerful and effective in mending a broken heart, healing a wounded dignity and bringing back trust to the couple.  Though words are only the beginning, it is a crucial first step.