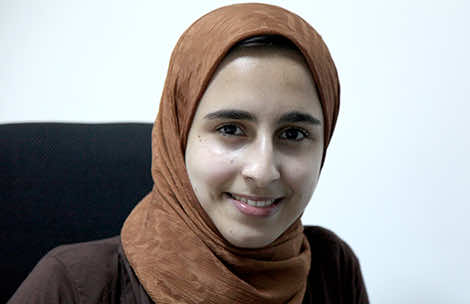 Now, Hassna Khoulali, a 19-year-old university student and winner of several prizes in Morocco, has won the international tajwid (melodic recitation of the Quran) prize in Malaysia. However, to our utter dismay, she has not been given any national attention on the part of the Moroccan media and among the public. Didn’t Hassna raise the Moroccan flag in Malaysia just the same way Dounia Batma did? Isn’t Hassna worthier of our attention than Batma when the former made her debut at the international level?

Hassna Khoulali is now the first Moroccan and Arab girl to win such an honorable prize worldwide. Hence, it saddens us to hear from Hassna that no one has waited for her at the airport gate in acknowledgement of her great achievement, that no one has congratulated her upon setting foot in her home country, Morocco, and that our media has not mentioned her so that other Moroccans will be informed about this great winner. Isn’t our neglect shameful? No doubt it is.

At the very least, the Moroccan Ministry of Religious Affairs should have acknowledged this Moroccan girl’s talents in reciting the Quran, memorizing it fully and eventually winning the first prize in Malaysia among girls from all over the world. Yet, Hassna has mentioned that she has not so far received a call from the Ministryr. Isn’t this a clear sign of looking down on our talented Moroccans, especially those with noble talents, such as reciting the Quran in such a beautiful voice as that of Hassna?

The crux of the matter is that had the winner been Dounia Batma or any other celebrity for singing, Moroccan media would have undoubtedly devoted hours upon hours of attention, acclaiming them and feeling proud of them. Even some Moroccans themselves would take to the street clapping their hands over their victory. Anyone acknowledging Batma’s achievements and turning a blind eye to Hassna’s achievements must bear in mind that Batma has amassed fortunes at their expense, while Hassna has brought them pure recognition and acclaim.

Regrettably, we are always standing in ovation of the wrong person. We are always making much ado about the Moroccan celebrities who make a fortune at our expense by means of advertisements, while we forget about the ones who ask us for nothing except an encouraging tap on the shoulder. How do you think Hassna would feel now that she is the winner without any recognition in her home country? Isn’t it inconsiderate of us to seal our lips and let this talent die undiscovered as has been the case with many of her caliber?

What has Batma brought us by helping her build her name by being her fans? Let us be considerate enough and contemplate the future of the aspiring Hassna who has memorized the holy Quran and made us proud of being Muslims. As a Muslim country, Morocco should have taken the initiative to applaud Hassna even before she came back home with a noble international prize in her hands.

On her way to Malaysia, Hassna was accompanied by her family, and when she returned, only her family stood by her. On the other hand, a few months ago, Batma was accompanied by her family, bodyguard, tens of her Moroccan fans and Moroccan media wherever she went. The only conclusion we can draw is that the Moroccan government, unfortunately, has no time for the talents of Hassna and her likes, particularly since they don’t bring to Morocco any money, and it’s as simple as that.