On average, homesickness occurs to immigrants in the first year of separation from the homeland, friends, and relatives, but gradually phases out with time as the newcomers settle and adapt to the culture of the host country. 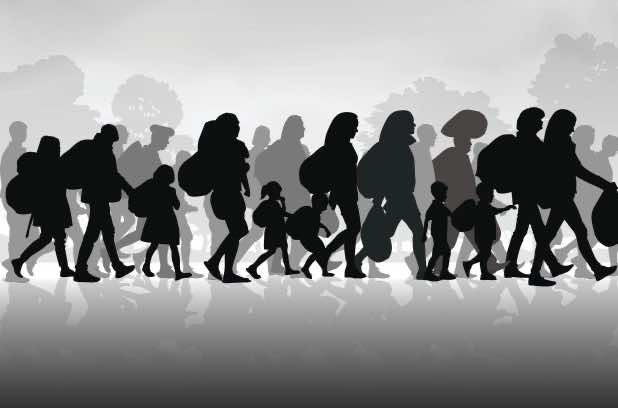 Rabat – The process of assimilation may take a short time to a lifetime, depending on age, education, mental and emotional states of the immigrants.

Immigration and Naturalization Service (INS) requires that all immigrants have a clean criminal record and financial support so they don’t become a public charge. Security through revenue or financial support, such as a career, grants, scholarships, cash, or affidavit of support, is a prerequisite for immigration.

Lack of resources to achieve sustainability is the main reason immigrant visas are denied by the INS.

One thing that sticks out with me about America daily is the sight of Caucasian, African-American, Native-American, Hispanic, Oriental, Arab and Jewish kids at school bus stops and playgrounds interacting with each other harmoniously in their Utopian little world; or at the Students’ Union on my university campus, talking or discussing academic subjects with each other respectfully.

Sometimes I close my eyes and go on listening to their debates, as they sound so much alike, I wouldn’t have a clue whether it’s the Arab, the Latino or the Oriental who is talking, and I can’t help say, what a great country!

Humans are creatures of habit and a product of their environment. It is self-evident when they miss relatives, friends, neighbors, neighborhoods, dishes they grow up eating, native languages they speak, and all that makes their comfort zone.

What matters most abroad is having the means to afford the basic necessities of life; however, acquiring new friends and finding a soul mate and starting a family does wonders helping to endure separation and alienation.

Immigrants plant new seeds and become actual participants when they reproduce. It gives them a sense of new identity and belonging to the new community.

The younger a person is, the lesser the alienation and the easier the blending and thriving in a foreign land. Immigrant toddlers and teenage kids don’t feel the integration, given the technological gadgets, school programs, mates and TV shows that eventually render all American kids the same.

As for the first generation of Americans, though U.S.- born, with no accent or any direct ties, they are generally proud and defensive of their ethnic background but don’t necessarily care to visit their parents’ country.

Middle-aged immigrants do well facing economic challenges overseas. They survive on their own better than other age groups of immigrants, but they live in economic exile, juggling two cultures. They may or may not lose their accents and customs, but with a self-consoling promise that one day they will retire in the old country, they end up instead growing more attached to their surroundings and grown-up siblings in America.

After six decades in America, my Moroccan relatives still speak both French and Moroccan to each other, they eat French fries with hot Dijon mustard – not with catchup like the rest of Americans, and they listen to Charles Aznavour and Shikhats all day long.

They still eat with their hands and don’t understand a thing about baseball. They have lost some, won some and became a hybrid, for when they visit Morocco with their kids, they too miss American foods, like hamburgers, pizza, hot dogs, tacos and fried chicken.

Like their kids, they too wear only jeans, T-shirts, tennis shoes, chew gum, and get away with things they probably wouldn’t do back home in their sixties, if they had stayed. As Thomas Wolfe said in his famous book, “You Can Never Go Home Again” because home is where you now live.

For elderly immigrants, change doesn’t come too easily. As the saying goes, “you can’t teach an old dog new tricks”, for old habits die hard. With deeply seeded mentalities, old people are not poised for a sudden change of atmosphere, and may never be accustomed to a new society.

For companionship, elderly immigrants would rather stay on the phone and talk to their peers across America or overseas than deal with their own siblings at home, who may as well be the next strangers on the street.

Nowadays, at least at two different locations of Starbucks cafes in Las Vegas, Nevada, there is a good chance to find a dozen of Moroccans in either cafe nightly. They go there not to just sit idly and sip on coffee, but rather in search of a company with their own kind to help withstand separation from their folks back home, particularly during Ramadan, when social gatherings are part of the Moroccan cultural setup.

Leaving one’s homeland to go settle in another for economic, educational or political reasons is a tough challenge, but at the end of the day, the dividends are tremendously rewarding.

Trading one’s comfort zone for certain adversity abroad may not seem a brilliant idea, but the payoffs that ensue, such as learning a new language, developing a broad-minded personality, a strong character through resilience, gaining pride and self-reliance, make the trade-off worth all the hardships in the world.

Faouzi Talby is Political science student at the University of Nevada in Las Vegas. He is a contributor to Morocco World News.