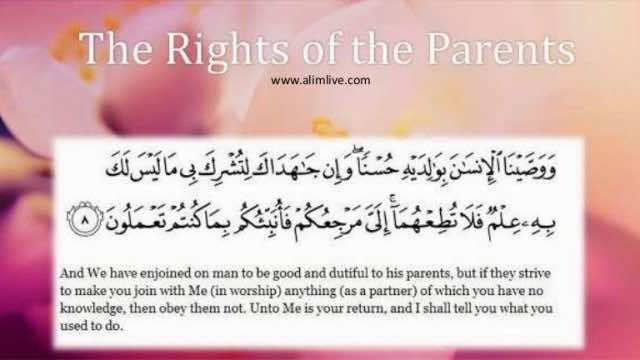 Beni Mellal – One exciting story still hammering in my mind now goes as follows:A small child got into a mosque in Paris. He had the following talk with the imam of the mosque: “My mother sent me to learn in your institute,” proclaimed the child. Being so surprised, the imam asked the child about the mother, “Sonny! Where is your mother, so that I can get some information about you from her?”

The child replied innocently that the mother is waiting outside; she is not a Muslim woman. She cannot enter the mosque.

The very inquiring imam rushed to meet the mother outside. He wanted to ask for more clarification about that. Thereupon, the mother answered, saying: “I have a Muslim neighbor. When she accompanies her children to school, I noticed that they all kiss her hand. I realized that this is the secret of their happiness. O imam! I have never remarked a Muslim sending off his parents to asylums. Would you mind doing me a favor? Take this small child, instruct him on how you treat your parents. I will be very much grateful.”

The imam took the child inside the mosque and, therein, a journey of self-discovery and realization began. The child turned out to be the greatest Muslim scholar of his age.

The morale of this story is crystalline. It tells of the splendid values Islam has promoted within Muslim families. It brought lots of dignity to parents. The very harmonious kinship between the son and the parents could be guaranteed only under the umbrella of a religion that gives true value to parents: Islam.

Sons and daughters of a Muslim background will never dare think of sending one of the parents to asylums. That would be a big felony, and none is going to accept that. Parents’ place is at home with us.

We are to take charge of them until they pass away. This is more than a bank credit we need to pay back when we turn old. Every child will never accept someday to see his/her parents thrown in any nursing home to receive a special care like the disabled.

Islam taught us how to kindly treat our parents in more than one occasion. “Paradise is under mother’s feet” is one saying that turned timeless and proverbial. At a very early age, children picked up the saying to continue measuring the love they have towards mothers. Mothers have been granted a high status in Islam.

Mothers are the life blood of the Muslim society and any positive change that might occur should be attributed to them. What consolidates this view is that they have nourished us in their wombs several months and they have endured lots of pain and suffering to release us and become what we are.

Not very much different from the story already recounted, the tradition strongly insists on the care for one’s parents, especially the mother. Her rights took precedence over that of the father.

In so doing, Islam builds the Muslim family on mutual respect and care. Children as well as parents are bound together by reciprocal agreements that should not be violated. The two sides must treat each other with all goodness and mercy.

A question that one can ask has to do with the status of fathers. Personally, I do believe fathers have equal if not more power in the house. They are tribal protectors, or guardians. If mothers are the pillars of the house, then fathers are the ceiling or the bricks on which the house stands, serving as an effective shield to the whole family.

In some families, however, mothers are to be congratulated on their strong and charismatic personalities. They may prove to be far more influential than fathers if the latter are sustaining huge gaps in their day-to-day conduct inside and outside the house.

An anecdote laden with much significance revolves around one child who asked his father a highly rhetorical question. “Daddy! What does it mean becoming a father?” said the child. “It is to take charge of the house, to work daily, struggle against hardships in life, and fulfill all family duties,” observed the father. The child then responded, “I want to be a father like my mother.”

Despite his young age, this child appears more cognizant of the miscellaneous burdens shouldered by his mother. He wanted to be like her in the future. She is for him the good model he has to emulate to be much successful.

Astonishingly, in the kitchen, the mother is preparing tasty tea or coffee, cooking succulent food like soup, tagine, couscous, to mention but a handful. She is also kneeling the floor, shaping bread to round flattish loaves, baking it in the oven despite hot weather. At the supermarket, she is purchasing meat, fruits, vegetables and other needs. At school, she is the one asking about her children’s performance and grades.

At midnight, she is praying and beseeching the Lord in one corner of the house. In her leisure time, she is reading her favorite books, writing diaries and exchanging talks with her close neighbors, visiting relatives and staying up until we get in.

What about the father? Unless dead, he might be at work or at the mosque.

We love them both; they are like seeds to trees for us. We must love them. They help us grow, prosper and reach heights. Honestly, we don’t know how to recompense them. Any idea?