New York - In the wake of the protests that rocked Moroccan cities, and the subsequent elections held last November, most Moroccans were thrilled by the election of your party at the helm of Morocco’s government and hopeful it will deliver on its promises to bring about real and tangible improvements in the daily life of the Moroccan people. 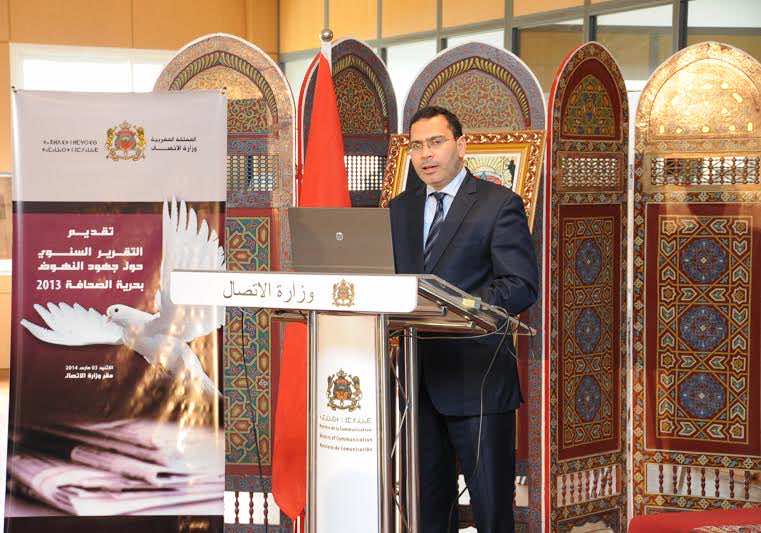 New York – In the wake of the protests that rocked Moroccan cities, and the subsequent elections held last November, most Moroccans were thrilled by the election of your party at the helm of Morocco’s government and hopeful it will deliver on its promises to bring about real and tangible improvements in the daily life of the Moroccan people.

Many Moroccans welcomed your appointment as Minister of Communication, as they see in you a seasoned professional and skilled orator, unlike most of your predecessors. We commend the many initiatives that you have been taking in order to improve our country’s media landscape and bring it up to par with international best standards.

As you embark on your challenging mission of bringing about a real change in our media, it is my duty as Moroccan, with passionate commitment in advancing the interests of my country, to bring your attention to a fundamental weakness of our media, namely its reporting and its lack of presence at the global level.

As you are aware, Moroccan television often suffers from poor quality in its reporting. More often, if not always, news related to the world’s hotspots are reported several hours after they have been circulated by other media outlets, such as Al Jazeera or Al Arabiya.

Moreover, while reporting about regional and global issues, such as the on-going uprisings across the Arab world, Moroccan television channels still rely on reports from other media.

More troubling is the fact that even in areas where Morocco has a lot at stake, our news stations do not maintain a regular correspondent, let alone an office. Take the United Nations in New York for example. One of the most important issues in Morocco’s foreign policy, the Sahara, is often debated at the UN, especially in October and April of every year.

In addition, the Sahara issue is often debated in universities and other institutes or think tanks in New York, Washington D.C and other cities in the United States. Many pro-Polisario civil society actors are lobbying aggressively throughout the year, by means of organizing panel discussions and debates, as well as by sending letters to UN officials and U.S. congressmen in order to garner more support for the Polisario position.

The same happens in Scandinavian countries where the Polisario and their supporters work year-long to garner the support of these countries’ public opinion, in total absence of any counterbalancing effort from Morocco.

These pro-Polisario NGO’s routinely avail themselves of media outlets that are readily available for their use in lobbying their cause. Furthermore, they regularly organize events that are widely covered and aim to appeal to a broad range of international public opinion and decision-makers.

This fact was on display on April 2011, when some UN-based press picked up leads that the French had removed, from the Secretary-General’s latest MINURSO report, references to the human rights situation in the Sahara. Despite this unfounded allegation, during media stakeouts of Secretariat and delegates about negotiations to renew the mandate of the UN peacekeeping operation, UN officials were continuously asked questions about this issue by the UN press corps, which ultimately reflected negatively on Morocco as it created the image that there were behind the scene efforts to influence content of UN reports.

Without permanent Moroccan media presence at the UN or in the United States, UN-based journalists and their peers are only exposed to leads and hear the perspective of the very active Polisario and their acolytes. This creates bias in reporting and serious misunderstanding in a very complicated issue.

More attention and support for Moroccan media professionals in the US

There are other civil society actors, as well as individual Moroccans and Americans who are very active in providing a balanced and nuanced position on the Sahara issue. They do not spare time or effort in order to educate people about the root causes of the this dispute and strive to advance Morocco’s legitimate claims over the territory. Yet, when participating in debates and discussions that champion the Moroccan perspective and suggest an alternative side of this issue, they do not find easy access to make their lobbying efforts available to a broader public.

Should one of the three Moroccan televisions stations keep an office or a correspondent in New York or other major US cities, the energy discharged by these Moroccans and Americans would more likely influence a wider audience and, thus, counterbalance the efforts of pro-Polisario activists.

A Moroccan media professional living in the US, who preferred to talk on condition of anonymity, told Morocco World News that “Morocco’s tv stations are still relying on last minute planning and are devoid of any comprehensive or long strategy with a set of defined goals”. He went on to say that Morocco’s tv stations are “occasion media”; in other words, they cover only specific events. “They never spur debates, follow up on a regular basis on issues that are of concern to Morocco, nor do they try to reach out to a wider international public opinion. Its production is devoted only to a domestic audience. Regarding their coverage of the Sahara, sometimes I wonder if their goal is to convince Moroccans of the legitimacy of Morocco’s position on this issue, instead of trying to reach out to international public opinion”, he noted.

He vented his frustration about the fact that Morocco’s TV channels seem not to have any strategy to engage US press or other outlets where there is strong potential for Morocco to tap into and affect public opinion.

“While Morocco has a population comparatively bigger than Lebanon and has more than four millions of its citizens living abroad, there is not one single Moroccan channel available in Cable TV or Dish Network. This not only prevents Moroccans from following what is happening in their country, but also restricts Morocco’s media from reaching out to international public opinion and projecting an international image”, he said.

Moroccan channels do not have any excuse not to do more reporting from the United States and Europe and to reach out to decision-makers in these continents. The improvement of Morocco’s image abroad and the strengthening of its position over the Sahara issue, inter alia, will not come about overnight in the absence of long term strategic planning from our media. One wonders what prevents them from trying to reach out more aggressively and effectively to inform American and European public opinion, especially when we know that there are scores of Moroccans living in the US, for example, who are constantly trying, in vain, to convince Moroccan channels to have a real presence in the American media landscape.

Take the example of media professional Mohamed El Hajam, owner of AVActions, a Washington-based public relations and media company, who does freelance work for Moroccan television, including Al Oula and 2M. Mr. El Hajam, expressed his frustration to see that “there are so many highly skilled Moroccans in the United States, who are working in high profile media outlets, universities and think tanks, and willing to help their country, but they have been ignored for so many years by our media officials”.

“These are outstanding people who have accumulated world class experience over the years and show the extent of Moroccan talent. “I think it’s time that Moroccan media executives started paying more attention to these people. For more than 10 years, I have been saying that the centers of decision-making are in Washington D.C and New York, not in Paris. We wonder why Morocco still does not tap into this pool of highly skilled Moroccans,” he said.

“While working as cameraman, many times I wished I had by my side journalists of the caliber of Mr. Mohamd Alami, Nasser El Houssaini or Fadoua Massat. I think Moroccans would take pride in seeing this kind of journalistic reporting for them on Moroccan news. Although the picture is still grim at the present, I am still hopeful that tomorrow will be better than today, and we can see our channels shine in the future,” he added.

An American who works at the United Nations, well versed on the Sahara issue and has paid numerous visits to Morocco, confided in me once that “Morocco’s media does not do a good job of educating the rest of the world, especially the United States, about Morocco’s position on the Sahara”.

“People in the United States would sympathize much more with Morocco if they better understood the context of Morocco’s claims to the territory”. The point is a better television media could play a vital role in filling this information gap.

In my attempt to rationalize the glaring absence of Moroccan television from the US media landscape, I tended to think it was an issue of resources. Perhaps the cost of maintaining an office in New York or Washington D.C, or in conducting interviews or debates on a regular basis with American scholars and decision-makers, was too high due to the prohibitive prices of satellite communication. Yet the truth of the matter is that Moroccan television suffers less from a lack of resources and more from a lack of long-term vision and strategy aimed at targeting U.S. and international public opinion.

“The major problem of Morocco’s three tv channels is the absence of real vision and orientation with a set of goals to achieve in terms of reaching out to international public opinion and polishing our country’s image overseas”, said another Washington D.C.-based Moroccan media professional who freelances for one of Morocco’s tv stations and preferred to talk on condition of anonymity. He went on to say that, “when it comes to questions of strategic importance to our country, Morocco’s media executives should once and for all understand that the targeted audience should be the global audience, rather than the local one. Moroccans do not need to be educated or convinced about these issues. It is useless to preach to the choir.”

It is also appalling to see the poor quality of the design and content of our main tv channels. One has just to look at their websites to realize how archaic they are and how much they are lagging behind their counterparts in other countries. Morocco’s main TV channels are of the rare channels in the world that do not have any social media pages, such as Facebook or Twitter, nor do they offer up-to-date videos or news.

At this juncture in Moroccan history, Morocco’s media executives have to break free from their outdated and poor-quality reporting and put in place an action-oriented plan geared towards reaching out more effectively to international public opinion. Moroccans have a lot at stake when it comes to their country’s foreign policy and the media has a big role to play in spearheading and promoting these interests.

Morocco’s media landscape has long needed a new blood to be injected into it. We hope that with your stewardship of the Ministry of Communication, you will be able to listen to people’s grievances and demands for a better and professional media in our country and live up to our expectations