Imane Boudlal, a 28 year-old U.S citizen, who was born in Morocco, is suing Walt Disney Co for harassment and religious discrimination, saying she was fired because she wears the Hijab (Muslim head scarf) at work, Reuters reported on Monday.

According to a complaint filed in a federal court, Iman worked as a hostess at the storytellers cafe, a restaurant inside Disney’s Grand California Hotel and Spa at Disneyland in Anaheim, in California.

After having spent two years and a half into the job, Boudlal asked permission to wear the HIJAB while at work, offering also to wear one that matches the colors of her uniform featuring a Disney Logo.

According to her lawsuit, Disney managers declined her request since (as they claim) it violates their company’s policy for how employees should look while on the job.

When she did wear the HIJAB against the will of Disney officials, she says she was told to take it off or work in a back area away from the sight of customers where they wouldn’t see her. When Boudlal did not compromise, she was fired, the lawsuit states.

The following days she was sent home at least seven times without pay for wearing the Hijab to work, the OC Weekly reported.

Boudlal’s managers offered her a hat as a substitute for her HIJAB. But Boudlal refused the offer, saying, “the hat makes a joke of me and my religion and it draws even more attention to me. It’s unacceptable. They don’t want me to look Muslim,” KTLA reported.

“Disneyland calls itself the happiest place on earth, but I faced harassment as soon as I started working there,” Boudlal said in a statement released by the American Civil Liberties Union of Southern California. “It only got worse when I decided to wear a hijab.”

She said she was also subject to Anti-Arab and anti-Muslim slurs, including being called “terrorist” and “camel” and “Kunta Kinte,” the name of a slave in a novel entitled Roots by Alex Haley. 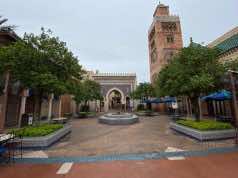