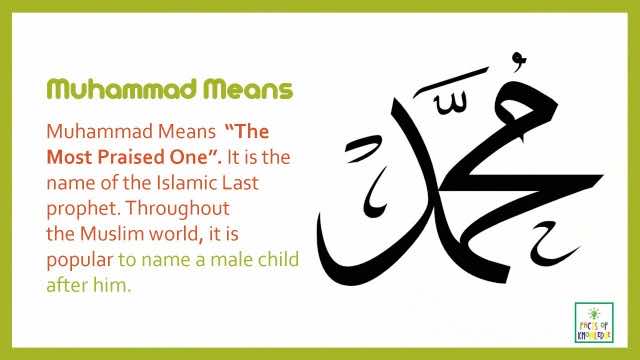 Beni Mellal – Many people, especially parents and relatives, get ill-at ease when the first baby comes into life. One is prone to notice feelings of joy as well as confusion taking over the faces. Almost everyone has a name in mind for the newborn baby. However, not all names are as much sweeter as the name of Mohammed: the name designating the last Prophet of Islam.

This name derives from the triconsonantal root “H-M-D” indicating praise. Accordingly, the name Mohammed comes to mean “Praised one.” This is definitely true because Mohammed was praised in the Heavens and the Earths by God, His angels and other earthy creatures like Man. The Holy Book clearly asserts that.

Throughout, the name Mohammed is transliterated in a wide range and variety of written forms like Mohammad, Mohammed, Mohammad, Muhamed, Mohammet, or Muhamet, besides others.

Yet, the common denominator between all these transliterations is the quality of praise which the Prophet excellently embodied, and for which he was known amidst all human beings.

Recent media reports have demonstrated that “Mohammed” is the most popular name worldwide. The Telegraph run the following headline: “Mohammed, The Nation’s (Secret) Favorite Name,” while The Jerusalem Post, Israel’s best-selling and most-read English daily opted for another headline: “‘Muhammad’ Ranked Most Popular Boys’ Name in England.”

Statistics have shown that most baby girls take the name of “Olivia”; this name is becoming more common in England in recent days. Yet, the most commonly used name given to baby boys undoubtedly goes for the name “Mohammed.”

The same name has already gained the top list in Amsterdam, Copenhagen and Brussels. And given the multitude variations of the Muslim name just mentioned above, there is a great fear lest true figures and official statistics would disclose the striking reality about the ubiquity of the name.

It is consequently estimated that more than 150 million men as well as boys bear the name Mohammed in many parts of the world. Though spelled differently, the three consonants keep the same place – unchanged.

In 2007, the BBC reported that Mohammed was the second most popular given name for boys in Britain, combining 14 spelling variations. In 2009, the name had grown substantially in popularity. And with London 2012 Olympics, many parents plump for the name again after the greatest performance and the highest achievement of Mo (Mohammed) Farah, the current 10000 m Olympic champion, who granted England two gold medals.

Confessedly, Muslims see in Mohammed – the Prophet – a symbol of love and peace, a paragon of excellence in all fields. This is why they seek to follow his guidance and emulate him blindly.

“The first reason why people keep the children’s name Muhammed is because of their love of the Prophet (PBUH) because they want to imitate him,” said Imam Abdullah al-Hasan of the East London Mosque.

Murtaza Shibli of the Muslim Council of Britain proclaimed that he was not taken aback while discovering that the name Mohammed is the most popular in some parts of the country.
“People choose it because of their love of the Prophet Mohammed, and they believe the name will bring them happiness and abundance,” he said.

“Also because of its meaning – the praised one, there is a belief that if you do name your children Mohammed they will follow the good example of the prophet,” he added.

A young boy, in his 17s, was asked about his name and he replied: “My name is Mohammed. I’m proud of it. Mohammed is the name of our Prophet. To have his name is a great honor for me. I must be like him in honesty, trust, love and good conduct. After all, the name reminds me of Allah because our Prophet was someone who was sent by Allah.”

Nowadays, good names are highly recommended; they can better identify humans. Some names are tuneful, easily memorable and so meaningful, while others seem to be devoid of any rich cultural or religious significance; Lots of efforts are to be done in (mis)pronouncing them.

As a nation, we are so blessed and privileged to have a name like Mohammed in our identity cards. Christians can hardly bear the name of “Jesus” in order not to relegate themselves to the divine, as Jesus, in their view, is supposed to be the son of God. Remarkably, they take the name of the mother and ignore that of the son or even that of the father.

Like the names of preceding Prophets, Jesus (in the Islamic culture referred to as ‘Aissah’ is used by Muslim people. It has never been (mis)used to refer to objects or commodities given the great love and respect Muslims maintain for Jesus.

The name of Mohammed will keep to lead the list of names. He is the last Prophet but not least of them.