The Moroccan national team of beach soccer won’t take part in the international tournament scheduled to take place from Friday 17 to Sunday August 19 in Montreal.

The reason behind this absence is the refusal of the Canadian consular authorities to grant visa to the members of the Moroccan team on the grounds that the latter may stay in the North American country after the end of the tournament.

“We heard from Ottawa, which made a verification with the Canadian Embassy in Rabat, that some players do not have sufficient financial means, which raises doubts that they could remain here after the tournament, ” Christian Prevost, one of the organizers of the tournament said on Radio Canada.

This decision utterly disgruntled the Mayor of the the borough of Villeray-Saint-Michel-Parc-Extension, Anie Samson. “It does not make sense, they are not visitors, this is a national team that comes in an international tournament where there will be Brazil, Mexico, Italy, the United States and they said no. Imagine the message we are sending to the world,” the Mayor said.

“These players are not anybody. These are professionals. The Moroccan team has travelled around the world and participated in many tournaments. We are surprised and shocked by this decision,” Mohammed Zemmouri, journalist with Atlas Mtl, told Radio Canada.

The Moroccan team was due to play its first match against Italy on Friday.

Up until now, there is still no reaction from the Moroccan Federation of Football or from the Ministry of Foreign Affairs. 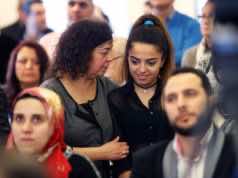