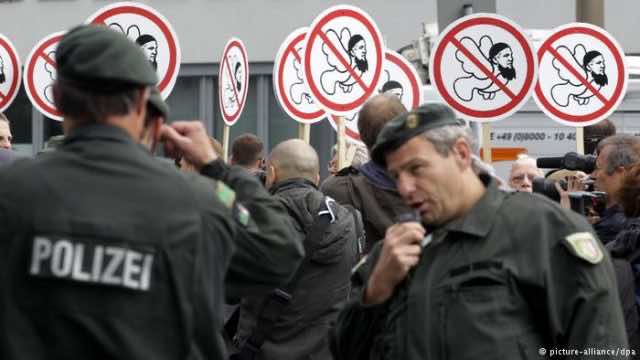 According to AFP, a court in Berlin decided on Thursday to authorize an far right-wing party, the Pro Deutschland, to expose copies of Danish cartoons of the Prophet Mohammed (PBUH) during planned demonstrations outside mosques this weekend.

Many people expect the very provocative decision to bring about mass protests in Germany and cause outrage in the Muslim world.

The court explained that the verdict doesn’t aim to hurt the emotions of Muslims or damage the ideal image of their Prophet. It accordingly insists that the cartoons are devoid of any intention to harm the religious creeds of Muslims.

“The cartoons fall under the rubric of “artistic freedom” and could not legally be considered as abuse of a religious group, the court was quoted by AFP as saying.

The far right-wing party is intending to brandish these cartoons on Saturday, August18 in front of three big mosques in New Köln and Feidjig in Berlin, capital of Germany.

The court rejected “the urgent complaint filed by three Islamic mosque congregations to prevent the ‘citizens’ movement Pro Deutschland from showing so-called Mohammed caricatures in front of their premises during demonstrations on Saturday”.

“Simply showing the Mohammed cartoons does not qualify as a call to hatred or violence against a specific segment of the population,” the court added.

In 2005, some Danish newspapers published several caricatures of the Prophet Muhammed, which sparked violent protests across the globe.

The publishers of the caricatures claimed they wanted to show their commitment to freedom of speech. As a consequence, dozens of people were killed.

The cartoon depicted the Prophet Muhammed putting on a turban shaped like a bomb with a lit fuse.

Also, in 2011, the premises of the French satirical weekly magazine, Charlie Hebdo, were firebombed after it published a cartoon of the Prophet reproduced the caricature and defended its “freedom to poke fun.”