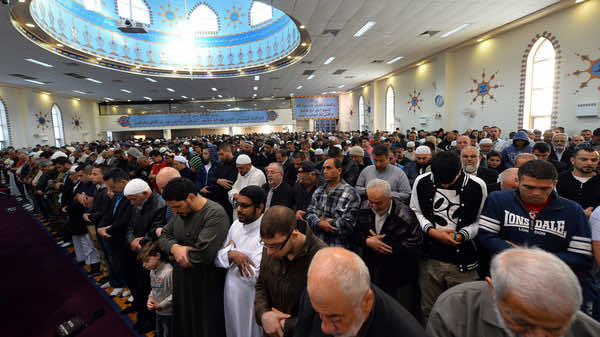 Beni Mellal – In an awe-inspiring atmosphere wherein the souls have deserted worldly matters and hearts have longed for a moment of inner purity – perpetual stillness with the self and other, the people of Beni Mellal City headed for Lamsalla, a place not much remote from the center. They were all going to observe the feast of breakfast prayers.

Some people drove their cars. Others preferred to go on foot withstanding the summer’s heat and the lengthy distance.

Women had already taken their place in the open square. They were surrounded by green trees on every corner and rivers nearby running with fresh cool water. Men, on the other side, were sitting massively in the first rows glorifying Allah aloud: “Allah is great! And praise be to Allah,” they said.

These were the two phrases that filled the open space of the square.

The festive scene was one that starts with glorification and ends with glorification. Joyfulness and merriment were also distinct features of this special day. Smiles à la Marocaine were given freely to strangers and warm greetings were exchanged in utter spontaneity.

Eyes didn’t eclipse love for others. Faces likewise expressed hospitality and benevolence. As for tongues, all spoke one language – that of thanks – to God and to His creatures.

The loud speakers fixed at the entrance of the square made the religious celebration special more than exceptional for us. They were making good echoes in the worshipers’ ears and even throughout the city.

The presence of Sidi Ahmed Belkassem, the shrine of a noble Saint added to the delightful splendor and grandeur of this annual festivity. Huge crowds of people were all sitting on the ground, stretching simple mats and Turkish carpets reiterating simultaneously glorification phrases and hymns about the divine.

No difference was established between poor and rich, old and young, strong or even weak. The carpeted ground brought everyone down on equal footing.

I attended this graceful ceremony alone, after taking a ride in one of the small taxis of the city. Though the driver was in a real haste, he couldn’t resist taking me to fulfill such a religious duty.

With a cheerful and handsome face, he welcomed me and friendly addressed me saying: “Happy Eid, Sir! Which destination?”

I was virtually muted and taken aback by the good manners of the driver. My garment, bought from a very short visit to Fez for MAD 150, suggested I was commemorating the Eid congregational prayers.

The taxi driver was not a person greedy for money. By contrast, he appeared to be a young intellectual forced to work due to misfortune. He wasn’t very talkative, and he not irritated by the overcrowded streets and his fellows’ rivalry.

On our way, he noted a disabled couple walking steadily. He stopped and asked them: “Where are you going?”

“To Lamsalla,” they both replied with a weak tone suggestive of a firm belief.

The driver then took all of us. His talking about the feast revealed this thorough knowledge in Islamic theology, a rich and large experience in human typology and even psychology. He was a highly educated man. Whenever we touched on a controversial point, he sorted out the proof and the relevant evidence on the spot.

He was very wise and well-educated.

Due to certain circumstances, he couldn’t continue his studies further. He told me he went to Italy in 1990, and there he used to learn from a Sudanese man. This man, he said, altered his whole being.

Back to his home country Morocco, he started to read much and sought wisdom outside his small vehicle. He listened attentively and wasn’t the type that violated conversational processes.

When we arrived in Lamsalla, he refused to take any money from us.

Lamsalla was almost full of people. There was no place for us because As we came late. We had to wait until the imam announced the starting of prayers and only then we could mingle easily with the other worshipers.

The sermon of the feast was much informative. “Was it a continuation of the conversation I had with the taxi driver?” I silently exclaimed.

The imam did not ignore any point about the feast. He talked about the rewards of Ramadan, the benefits of observing the Eid prayers, the potential of the good believer, adultery, addiction to alcohol, juvenile delinquency and other issues.

Before he finished, he had prayed for the Muslim community worldwide. He was praying and screaming like a child. His abundant tears and repetitive cries pushed some people to also cry. Only at that time, the feelings felt and meanings heartfully expressed became one.

Indeed, those were not only the tears of extreme happiness to celebrate the breakfast feast, but they were also the tears of sadness for bidding farewell to Ramadan. Prayers have been declared. Everyone stood to pray and the above-mentioned glorifications came into sight again like birds chirping about divine love, longing in one’s ears.

Eventually, the imam requested the worshippers to await few minutes. None dared ask about the reason. But it was conspicuous for us: a brother and a sister have just converted into Islam.

Let’s applaud for them.