The only Arab teams based in Bedford town are the Moroccan and the Tunisian squads; they have been training for days using sporting facilities to gauge the readiness of their athletes ahead of their journey to the peak of sporting excellence.

Of the 31 Tunisian squad members, 13 are women athletes who will compete in track and field events in which they have excelled in the previous games in Beijing 2008.

Tunisia came 14th on medal table four years ago with 22 medals of which nine were gold, but 6th in athletics. Ali Harzallah the head of the delegation is very optimistic Tunisia will do better on the medal tally in London.

“We hope to be among the top five as we want to enhance our position in the medal table” he said. “Some countries are participating with 80 athletes and we do not have those numbers, we want to improve on medals we won in Beijing.”

One of the Tunisian athletes hoping to better her record is Yosra Bin Jumaa, a 26-year-old wheelchair racer in 100 and 200 meters. This is her second Paralympic Games after Beijing 2008 where she won a bronze medal.

“I have more experience now than four years ago, I have the confidence and the know how to compete with high concentration and no sign of weakness,” Yosra said.

A team of 30 top athletes will represent Morocco, the will compete in four events, athletics, weightlifting, volleyball and tennis.

Three of the six female athletes will participate in athletics.

Najat Algaraa, the record holder for throwing the discus, aims at clinching her first Paralympic gold medal, after her 72 able-bodied compatriots left the London 2012 Olympics with only one bronze medal.

Algaraa promised to rectify the disappointment of the Moroccans during the Olympics. She was confident in achieving what her nation was waiting for.

Khadija Acem is one of the three female power weightlifters training for the London Games.

Despite the late preparation, Khadija is hopeful to leave with a medal. Her determination drives her to succeed.

“Normally it takes four years to train form but due to unforeseen circumstances, we only started three months ago; however we will be able to achieve our aim to take one of the medals,” she said.

A record of more than 1,500 female athletes will compete across 18 sports with many coming from the Arab world to the city of London that saw the birth of the first Paralympic games in 1948. 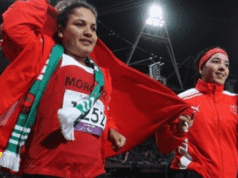 26 Moroccans to Compete at Rio Paralympics

The Arab Spring and the Unfinished Revolutions