Filmmaker Amanda Homsi-Ottosson, a Lebanese who grew up in Syria with a predominantly conservative population, says she always felt that sexual taboos caused confusion amongst people of her generation.

That instant, the London-based director decided to make a documentary about the magazine. Her short film, Jasad and the Queen of Contradictions, about the magazine and its founder, Joumana Haddad, was shown at this year’s Lebanese Film Festival.

“I wanted to know who was behind this and that’s when I discovered it was Joumana – a Lebanese woman behind this all!” she says.

Homsi-Ottosson met with Haddad and learned the reasons for launching the magazine, which is run on a small budget at a makeshift home office.

She met many obstacles, including convincing hesitant ad agencies (who would have thought they’d be afraid of provocative and sexual marketing?) to buy space in her glossy.

The magazine was also barred from selling on newsstands. Her solution was to provide online subscriptions, which Haddad says generated customers from all over the region, with the majority coming from Saudi Arabia.

While Haddad acknowledges Lebanon has wider freedom of expression than the rest of the region, she remarks, “There’s the surface – and the core.” The country is not really that different from many other Arab conservative countries, she says.

For the film, Homsi-Ottosson also sought a range of opinions from the general public about Haddad, the magazine, and topics considered taboo, such as virginity.

“Sharing and exposing ideas is always better than not talking about them, it becomes less taboo. In Jasad’s case, it is discussed through art, literature, poems, essays and interviews in Arabic,” Homsi-Ottosson says.

“Regardless of what the idea is, this is someone who believes in something and did it without fear of being judged or criticized. I know there are many courageous women in the region who are doing just that, standing in what they believe in and I hope this film will inspire many more.”

Some criticized the film as a publicity stunt. Others said the magazine was necessary in current Arab society, which is repeatedly called “schizophrenic” and “hypocritical” by Haddad.

Homsi-Ottosson anticipated her documentary would receive a fair amount of criticism and controversy. But she hopes it opens discussion and debate, something she believes is necessary. It received positive feedback from the audience at its festival screening on August 24, she says.

The Tenth Annual Lebanese Film Festival, which kicked off on August 23, concludes Sunday. 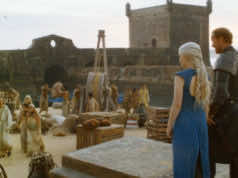