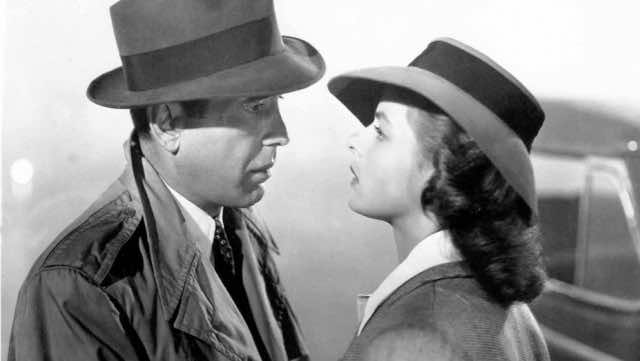 New York- Casablanca is one of the most acclaimed classical Hollywood movies that managed to survive through time, increasingly attracting the interest of audiences.

Its particularity can be attributed to different reasons. First, there is the unique narrative of the movie which defies the standards of classical Hollywood movies both in terms of characterization and ending.

Second, the movie was shot during the Second World War, and unlike the majority of war movies, Casablanca portrays consequential historical events that took place during its shooting, thus the movie carries loaded meanings about the political and the military situation of that specific historical period.

As far as the narrative element is concerned, the character Rick does not perfectly embrace the conventional traits of the classical protagonist. At the beginning of the movie, his personal features are painted through the description of his employee Carl and the café clients who claim that Rick is an aloof and snobbish man and later when the police arrested Signor Ugarte, the negative image of Rick’s persona is reinforced especially when he says “I stick my neck out for nobody”.

However, as the movie events advance, Rick reveals himself to be “sentimentalist” and “humanitarian” exactly as his friend Renault suspects. Rick’s apparent indifference and coldness are mainly due to the colourful life he has led and the failure of his lifetime love but his true kind nature unravels in many occasions. For instance, he provides money to a Bulgarian couple who yearns to flee to America and the sacrifice he makes at the end is a perfect example of his noble character.

Thus, Rick obviously embodies some typical classical Hollywood characteristics; he is a charismatic person who refutes the offers of the most beautiful ladies. He is also the causal agent of the movie since he undergoes different changes throughout the movie and he is the decision-maker of a number of its events.

Still, the movie’s ending challenges the canonical traditions of classical Hollywood movies. Many of the Hollywood movies produced in the 50’s either have a happy ending manifested in the resolution of the problems and the union of the lovers or the death of one of the leading characters.

However, the ending of Casablanca causes the surprise of a wide number of spectators; the hero gives up the love of his life to serve a greater cause, which is fighting for the liberty of one’s nation. Apart from this essential concern, Rick finds himself in a real dilemma since his beloved’s husband is a respectable, a noble man. For these reason, Rick’s decision at the end is supposed to bring favourable reactions from the audience.

The structure of the movie is also unique, the events of the movie are not presented chronologically and they do not respect the classical narrative pattern, which usually consists of the initial undisturbed situation, the disturbance and then the return to the initial stable state or what Tzvetan Todorov defines as “the move from equilibrium through disequilibrium to a new equilibrium”.

The movie starts with an establishing shot that introduces the viewer to the main setting which is Rick’s café and its surroundings where people of different nationalities interact. The voice-over narrator in the movie explains the background of the events to foreground the audience to the already disturbed and messy beginning in which people easily get killed and robbed.

In addition, the movie ends without the resolution of all the chaos since the war would still continue and most of the European refugees were unable to reach America. The end rather indicates a beginning of a great struggle to achieve justice and liberty.

However, Casablanca like many classical movies comprises two different plotlines. There is the heterosexual romance of Rick and Elsa and their love story is complicated by the presence of a third male character whose noble qualities make him a suitable rival for the protagonist.

The viewer discovers the romance story through the use of flashback in which the scene where Rick was alone in his café fades out for a happier scene with a high key lighting to express the most joyful moments of Rick and Elsa’s lives. The second plotline is about war that draws people of different cultural backgrounds to a specific African city, which is Casablanca.

More significantly, Casablanca, which was shot during wartime to depict the situation of that particular historical period, fosters significant political and ideological messages. Although the setting of the movie is a Moroccan city, there is almost a total disregard of any Moroccan representative in the movie. The only supposed Moroccan character is the fabric seller and he is portrayed as a greedy and foolish person who reduces the price for Elsa from 700 Francs to 100 Francs after Rick’s interference.

Furthermore, the Moroccan city is represented as a messy and wild place where anything can happen. This fact is confirmed by many characters such as the German commander who threatens Elsa saying “human life is cheap in Casablanca” and Signor Ferrari who tells Laszlo that “no one is supposed to sleep well in Casablanca”.

Also, many characters in the movie feel entrapped in Casablanca which they consider as a prison; this idea is expressed by one of the characters, who says with a desperate sigh “I will never get out of here, I’ll die in Casablanca”. Thus, the city presents a threatening peril for many of the characters of the movie whose ultimate goal is to leave the unsafe city for Lisbon in order to reach the secure land of America.

Besides, the movie drops out an important historical element, which is Morocco’s resistance against the French colonizer. This elimination is somehow expected since at the beginning of the movie the voice-over narrator does not introduce Casablanca as a Moroccan city or even as an occupied Moroccan territory, he refers to it as “French Morocco,” indicating that the city will be primarily considered as a French soil.

This idea is supported by Laszlo who states that the Germans cannot hurt him because he is in the “unoccupied France”. This inconsideration of the Moroccan identity and the Moroccans’ struggle for liberty during that particular period strongly contradicts with the major theme of the movie which is fighting for the freedom of one’s nation.

Casablanca’s both defiance of traditional standards of classical Hollywood movies in terms of story structure and its fostering of certain typical aspects, such as the inclusion of two different plotlines, contributed to making it a unique classic movie. Unlike many classical movies, Casablanca resists time, remaining one of the most appreciated movies, regardless of its politically debatable details.