Abdelali Hami-Eddine, a member of the Islamist leading party’s General Secretariat, said during a seminar organized by the youth of PJD in Tangiers yesterday that the meeting which took place between the king and the minister of Interior “was unconstitutional.”

The meeting was held on August 9, 2012 during which the king gave orders for opening investigations concerning a number of complains related to Moroccans living abroad. The event “sends non reassuring signs regarding respect of the constitution, especially in its part that deals with the power of the king and that of the president of the government,” he was quoted by Hespress as saying.

He called upon democrats in the country to struggle for the sake of making the constitution the document that shapes the relationship between the ruler and the governed. He also stressed that the constitution should be regarded as both a contract and a commitment towards the citizens to be necessarily fulfilled.

Abdelali Hami-Eddine went on to say that without the February 20 movement, “Morocco could never witness the Arab Spring”, emphasizing that the real battle of Morocco today is “that of the democratic interpretation of the constitution and fighting corruption.” 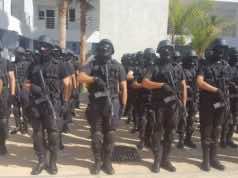