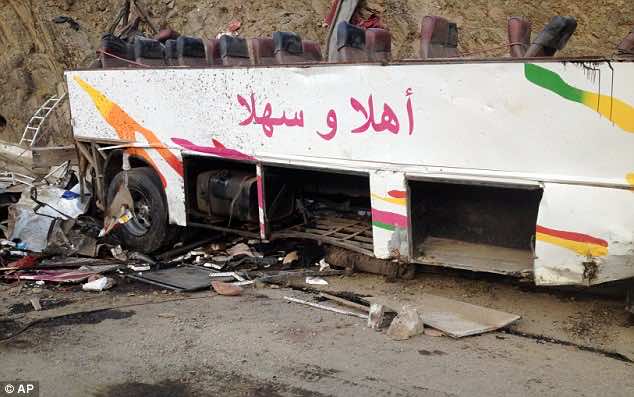 A bus plunged into a ravine in the Atlas mountains of southern Morocco early on Tuesday killing at least 42 people, a security official said, in the worst such accident recorded in the kingdom.

All the victims were Moroccan, a local official told AFP. “But we are still in the process of identifying the bodies, as well as the injured,” he added.

The accident took place at around 2:00 am (0100 GMT) when the vehicle fell off a main road in Haouz province, around 100 kilometres (60 miles) south of Marrakesh, one of Morocco’s top tourist destinations.

The crash also left some 25 people injured, who were taken to different hospitals in the region, according to a local official.

The official MAP news agency, which said the bus fell 150 metres (165 yards) gave the same death toll of 42, saying that five of the victims died in hospital, and that 24 people were injured in the crash, four of them critically.

The cause of the accident was not immediately clear.

An official in Haouz province said an inquiry had been launched and a crisis group set up. The provincial governor Younes El Bathaoui arrived at the site of the crash to supervise the rescue operation, according to MAP.

The tragedy occurred as the bus was heading towards Marrakesh, after crossing the Tizi-n-Tichka pass, the highest in Morocco.

The road, linking the central Moroccan city with the Sahara gateway town of Ouarzazate, winds through the mountains for dozens of kilometres (miles).

It was the worst bus crash recorded in Morocco, which has a poor road safety record. In November 2010, 24 people drowned when a bus carrying workmen tumbled into a river near the capital Rabat.

And in late July, 12 people were killed in central Morocco when a lorry driver lost control of his vehicle after one of its tyres was punctured and crashed into a bus.

Road accidents in Morocco claimed 4,200 lives last year, a rise of around 12 percent on 2010, according to figures from the transport ministry.