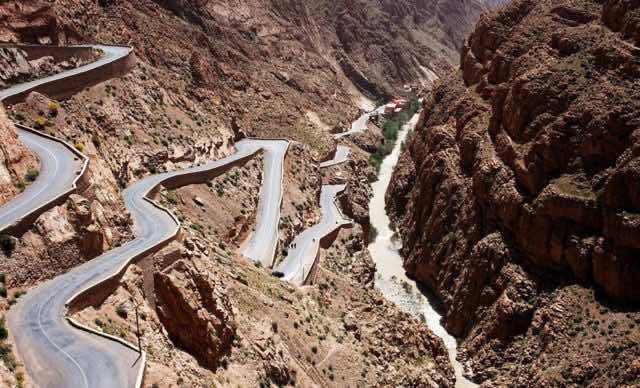 Rabat – In my last article, I said that the overall situation in morocco is fuzzier, as people tend to focus on some issues that have no real impact on the citizen’s daily life. In the aftermath of the adoption of the new constitution, much razzmatazz has been raised about trivial things that overshadow some serious and worth discussing issues. Among these issues, one can mention the futile of legalizing having sex without having a marriage contract, as if Moroccans got all their “lacking”-essential rights.

Unfortunately, all the serious issues introduce themselves in unwanted and terrifying ways. A case in point, yesterday’s traffic accident that happened in Tichka, a region between Marrakech and Ouarzazate. I personally don’t consider it an accident. We can call it a “massacre”! But accident is surely not the right description of what happened yesterday. In the worst Morocco’s road accident, 44 Killed and 23 injured in a bus crash. At almost 2:00 AM a bus that was taking 67 passengers to “nowhere” crashed to a deep valley, causing a tragedy that will be scratched in the memory of all Moroccans for decades to come.

Pondering upon the repercussions of this “massacre” in due time, I will explain why I call it a massacre and surely not an accident. Starting with our infrastructure, no one can deny how bad our roads are. They are really lacking the essential conditions of a normal road; holes everywhere, very narrow roads, no passers-by passages…etc. In the countries that respect their citizens, we would never find such massacres repeated on a daily basis. We would rather find their government striving and working day and day out to satisfy their citizens, instead of neglecting them as if their lives were worthless.

In addition to the infrastructure, the biggest problem that we suffer from is the irrationality of our people. In fact, accidents are not due to the bad infrastructure only, they are brought about also because of the criminal behavior of most people, the lack of respect of each other, not to mention the total absence of law enforcement.

Accidents are due to people themselves. For instance, if the driver sees a hole, shouldn’t he slow down? Can anyone know how many hours was the driver of the bus driving before the accident? We shouldn’t blame the roads only; we should blame the people themselves. Plus, isn’t it strange that a bus is crowded with 67 passengers, as if there was no police to control? If the police officers or gendarmes were doing their job in an honest and clean manner, we would not be mourning our death now. Yet, we all know, how most police officers and gendarmes are corrupt and how easily they can turn a blind eye on any contravention as soon as you give them a bribe. The problem lies also in our lack of civism and lack of respect to the law and to each other. Moroccans are egoistic and uncivilized on the roads. They behave like in a jungle, with no respect, no fear of anything. They just want to arrive to their destination regardless of the way they can do it, and regardless of how many human lives they may endanger with their criminal behavior.

This accident reminded me of another accident that happened on 28 April 2008 when 46 workers died in a mattress factory fire in Casablanca. The likes of such accidents signify one thing; no more no less: They simply show that nobody cares about the value of our citizens. They show that humanity in morocco has no value. I wonder, I only wonder about the job of those who put themselves in the front of defending human rights in Morocco. Isn’t this massacre worth struggling for more than freedom of sex? I personally found it peculiar that no human rights association condemned this massacre.

It is a massacre, a massacre done by those who are responsible for these accidents. It is a massacre plotted out by those who find it easy to take our money without doing anything to fix the run-down infrastructure of our country. It is a massacre caused by the corrupt policeman who let those coffins-on-wheels buses take our passengers. The only thing that I am sure about is how longer these people will hold their position or how much bloodshed they will cause. However, I know that someday they will pay for what they did, because we all know that Allah waits but does not neglect.