Chanting, cheering and moved to tears, 15,000 faithful Democrats welcomed the return of the “Comeback Kid” as Bill Clinton reveled once again in the spotlight of a heated presidential campaign.

Twenty years after a fresh-faced Clinton picked up his own first nomination, the 66-year-old was wizened and raspier but still clearly in his element, improvising at times far from the prepared text as he nominated Barack Obama for re-election.

His voice was hoarse at the start, but Clinton was quickly dolling out applause lines with trademark ease to a fired-up crowd that had been waiting hours to hear from the Democrats’ favorite elder statesman.

“We’re here to nominate a president, and I’ve got one in mind,” he said with a trademark smirk for the camera.

For 48 minutes, Clinton painstakingly outlined the case for Obama’s second term, linking the president to his own successful two terms. Clinton worked to own the issue hindering his party’s ticket this year: the flagging U.S. economy.

“No president, no president — not me or any of my predecessors, no one could have fully repaired all the damage he found in just four years,” he said of Obama.

As the prime-time speech went well over its allotted time, forcing television networks to push back the evening news, the crowd looked on adoringly, laughing and shouting with every ebb and flow of the master politician’s narrative.

“Folks, whether the American people believe what I said or not may be the whole election, I just want you to know that I believe it,” he said, his voice faltering slightly as tears streamed down the faces of several delegates. “With all my heart I believe it,” he implored.

Republican nominee Mitt Romney has borrowed Ronald Reagan’s famous slam against Jimmy Carter that voters are not better off now than they were four years ago.

“Are we where we want to be? No. Is the president satisfied? No. Are we better off than we were when he took office, the answer is Yes,” he exclaimed resoundingly, earning the biggest cheer of the night.

Clinton was famously labeled the “Comeback Kid” during his 1992 presidential run when he came back from the dead in the key New Hampshire primary after reports of an extramarital affair surfaced. He went on to win the presidency and serve two terms.

Excited as they were for Clinton, the crowd went wild when Obama himself took to the stage at the end, accepting a bow from the former president before the two embraced in a sign of unity.

Warren, a hero to liberals who is in a tough battle for a seat in Massachusetts, was greeted with a standing ovation and cheered throughout her prime-time national soapbox at the Democratic National Convention.
She won screams of approval as she mocked Romney’s statement earlier this year that corporations are people.

Fluke rose to national fame earlier this year when conservative radio host Rush Limbaugh branded her “a slut” and “a prostitute” for arguing before a congressional panel in favor of health insurance coverage for contraceptives.
“I’m here because I spoke out, and this November, each of us must speak out,” the 31-year-old Georgetown Law School graduate told cheering delegates.

“During this campaign, we’ve heard about the two profoundly different futures that could await women — and how one of those futures looks like an offensive, obsolete relic of our past,” she said, as the faithful roared back. 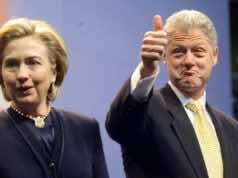 Would Little Bill Walk Two Paces behind Monumental Hillary if She Is Elected President?