Morocco’s national team head coach Eric Gerets is under the hot seat after Morocco fell 2–0 against Mozambique Sunday as part of the last and only qualifying round for Morocco for the 2013 CAF finals to take place in South Africa beginning January 2013. Since his arrival two years ago, Gerets has struggled to win any games decisively with the first team except in rare occasions, some dubbed a fluke. As for achieving significant success, he left much to be desired for.

Moroccan fans and media have repeatedly called for his resignation, never more strongly than after Sunday’s defeat. But as of now, he is still in place. Officials in Morocco had said that he could not be dismissed without having to pay him his full dues, unless he fails to qualify the team to either the 2013 CAF tournament or the 2014 World Cup in Brazil. These are some of the terms of his contract with the Moroccan Football Federation.

There are some elements in his contract that have come under heavy criticism including his salary. Some reports have him earning as much as $300.000.00 a month, making him the most expensive coach in Morocco’s history and Africa, and reportedly the second highest paid national team coach in the world after Fabio Capello who now heads the Russian national team. The secrecy surrounding his contract has fueled such reports and has opened the floodgates for more allegations and speculations.
Gerets inherited a dysfunctional Moroccan national team and hopes were high that he would rebuild not only the team, but set in place a structure and a foundation to develop soccer in the country for many years to come. He simply has not delivered.

Under Gerets reign, the Moroccan national team had turned to something like a zoo. He simply has no idea how to deal or manage his players for instance. After numerous scuffles with Adil Taarabt of English Premier League’s QPR, Gerets had to deal with many others players rejecting calls to p lay for the national team. Youssef Hadji had been called in the last game but he reportedly was a no show. Hadji went as far as calling for Gerets dismissal after Sunday’s defeat.

AlArabi, who plays for Granada in the Spanish La Ligua, also excused himself from competing with the team claiming that his pregnant wife is due any day now. As for the Saaidi, “the promise” he preferred to remain and train with his new team Liverpool than to play for Morocco’s National team. These are just example… It is hard to find loud voices faulting or blaming these players for taking such a stand against their national team and that is quite reasonable and logical given the state of the team and its management.
Some argue that Gerets failures so far should not come as a surprise, since he had never coached a national team before, and that all his previous success came as a coach of teams that competed in national leagues. It was a gamble hiring him and lady luck is not smiling, at least not so far.

More likely than not, Gerets will stay put not only due to terms dictated by his contract, but due to the fact that the second leg against Mozambique is about four weeks away. This game would be his absolute last chance. His faith hangs on overcoming a 2-0 deficit. Once he is gone, we will know for sure, is it really Eric Gerets or is it something much deeper than that? 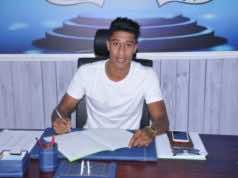