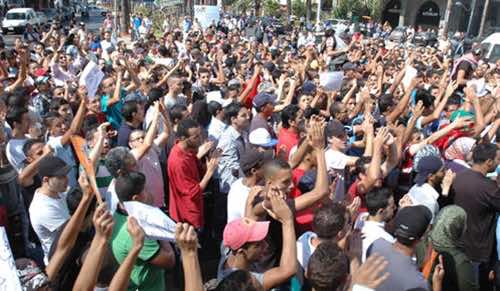 Moroccan activists called for demonstrations to be held Wednesday morning and afternoon to protest the screening of a movie deemed to be offensive to the Prophet Mohammed peace be upon him. Calls have been for protests in front of the US embassy, American Consulate and American clubs among many other places.

Badr Touasli, a young Moroccan journalist and civic activist said, “it is very important that Moroccans turn out for the demonstrations to send a message to those who made the movie and the entire world that we love our prophet.”

Others say demonstrations would not help, as Widade Echkairi, a 20 year-old student, stated “I believe that demonstrations in streets will only cause sabotage and problems. We need to find other ways to prevent such acts from happening rather than by protesting.”

Mohamed Amine Hachimi, a 27 year-old teacher has the same view. He argues that “taking to the streets, shouting is just a waste of time. I think we should fight back by education and learning, not by demonstrations.”

Why is there so much controversy around depictions of the Prophet Muhammad then?

The majority of scholars have prohibited depiction of the Prophet (Peace be upon Him). This is because, according to them, the harm and evil done through that is much greater than the goodness it brings as it can encourage idolatry as well.

In Cairo, Al-Azhar, Sunni Islam’s main seat of learning, has issued a fatwa against the movies and series, on the grounds that the portrayal of Prophet Muhammad is strictly forbidden.

Conversely, if we stop a moment to think how we can really respond to the makers of this inappropriate portrayal, we would realize the fact that demonstrations will barely serve any good.

The first thing we should be working on is ourselves. Lasting change, I believe, comes from within and manifests itself in our thinking and actions. To perform permanent change in our life we have to change our self first.

If we really want to show love to our beloved prophet, we should practice what he taught us, follow his Sunna (tradition) and stick to His wonderful character.

We should also become model of such behavior so that other nations have a good image of us and Islam.