Afghanistan’s leader has put off a foreign trip for fear of violence at home over an anti-Islam film, officials said Thursday, as anxious governments across Asia stepped up security outside US embassies.

The heightened measures came after Washington’s ambassador to Libya was killed during a mob attack in the city of Benghazi on Tuesday, and after anti-US protests in Egypt’s capital Cairo.

Indonesia, the world’s most populous Muslim country, joined Afghanistan in demanding that YouTube block the crudely made film that has triggered the protests with its mocking portrayal of the Prophet Mohammed.

“The film certainly is offensive… and has upset Indonesian Muslims. We don’t wish for anyone to be provoked by it and for violence to break out here,” he said.

So far, there has been no trouble in Indonesia, where most of the 240 million population practise a moderate form of Islam.

Reaction in Afghanistan, where US-led troops have been waging a decade-long war against the fundamentalist Taliban, has also been muted for now. But unwilling to take a risk, President Hamid Karzai postponed his visit to Norway.

“He won’t go, he’s worried about possible riots over the release of the film,” a presidential aide told AFP in Kabul, requesting anonymity because he was not authorised to speak to the media.

“He prefers to stay at home at such a critical time,” the official added.

On Wednesday, Karzai and US President Barack Obama discussed how to “help ensure that the circumstances that led to the violence in Libya and Egypt do not pose a threat to US forces or Afghans”, the White House said.

The low-budget movie, whose director goes by the name Sam Bacile and is believed to be Israeli-American, depicts the Prophet Mohammed sleeping with women and dwells on themes of paedophilia and homosexuality.

The film has been promoted by US pastor Terry Jones, who has drawn protests for burning the Koran and vehemently opposing the construction of a mosque near Ground Zero in New York.

Afghanistan’s government has condemned the film as “inhuman and insulting”, and Pakistan’s said the “abominable” production was designed to stoke inter-faith hatred around the anniversary of the September 11, 2001 attacks.

In Afghanistan, riots killed around 40 people earlier this year after US troops burnt copies of the Koran on a military base.

India, which has the world’s third biggest Muslim population after Indonesia and Pakistan, issued an alert to security forces deployed outside US diplomatic missions.

“It goes without saying that we are obviously concerned about all internal and international implications in case something happens. So we are taking extra precautions, it is a pre-emptive effort,” he said.

In Bangladesh, which saw protests by tens of thousands of people against the publication of Mohammed cartoons by a Danish newspaper in 2006, authorities deployed more armed police at the US and other embassies.

The US embassy in Kuala Lumpur, capital of Muslim-majority Malaysia, urged Americans to avoid large crowds and noted the potential for unrest around Friday prayers.

The Philippines, a largely Catholic nation that is home to Muslim extremist group the Abu Sayyaf, said police commandos had been guarding the US embassy in Manila round the clock since the unrest in Libya and Egypt broke out. 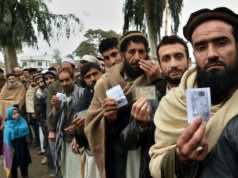