State secretary, Hillary Clinton paid homage, Thursday in Washington, to the leadership of HM king Mohammed VI, who made of Morocco “a leading country” and an “example.”

She said at the opening of the first session of the Morocco-US strategic dialogue that the US sees in Morocco a “leading country” and an “example” for which HM the King “deserves a great homage for the achievements made in terms of reforms.”

Clinton hailed Morocco for “anticipating the changes” through consolidating its democratic process, at a time when the Middle-East and North Africa goes through profound mutations.

Speaking of the new framework of talks, the State secretary said it comes at a moment where Morocco and the US cannot make do with a centuries-old friendship, “although it is the oldest uninterrupted (friendship) between the United States and any country, as we have a strong will to go forward towards a more dynamic, growing and future-oriented partnership.”

The political work team leading the talks will “examine how the United States can continue to support the efforts made by Morocco to translate the commitments into actions,” Clinton said, voicing hope to see Morocco’s exports to the US grow, thanks to the “stability of the kingdom” and the solidity of its economic basis.

Clinton also expressed the US “great appreciation” of the “constructive” role Morocco plays in the UN security council, especially its support for the efforts aimed to end violence and bloodshed in Syria, and to help put this country on the path of democracy.

Clinton also congratulated Morocco for hosting the next meeting of the friends of Syria, due in October, and voiced hope to continue working with Morocco as a “close partner, even after the mandate of Morocco in the security council. 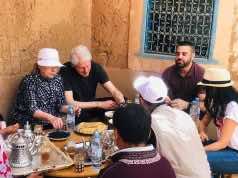