Worshippers emerging from weekly prayers at a mosque in central Tunis hurled insults at journalists on Friday, amid heavy security and after Tunisia imposed a protest ban, an AFP correspondent reported.

The Muslims shouted “media of sedition!” at the group of journalists, among them members of the foreign press which has given wide coverage to a US-made film and the publication in France of cartoons mocking the Prophet Mohammed.

Riot police and armoured vehicles were deployed in force around Al-Fatah mosque, just a few hundred metres (yards) from the French embassy and where a Salafist leader was able to preach a controversial sermon on Monday.

Religious Affairs Minister Noureddine El Khadmi preached at the mosque on Friday instead, calling for calm and restraint, without referring to the cartoons or the film that first sparked angry protests across the Muslim world last week.

“Calm, a sense of proportion and rationality should prevail in these difficult times for Muslims,” he said in a message that emphasised the need to respect foreigners and diplomats.

Police directed the faithful away from the French embassy as they emerged from the mosque, and carried out searches on some of them, while helicopters flew overhead.

Tunisia’s interior ministry banned all demonstrations on Friday after receiving a tip-off about preparations for violence, and after four people died in a protest last Friday at the US embassy and adjacent American school.

Seif Allah Ibn Hussein, who heads the extremist Ansar al-Sharia movement and is suspected of organising the protest, accused police of provoking protesters and called for the interior minister to quit during his sermon on Monday. 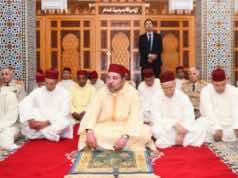