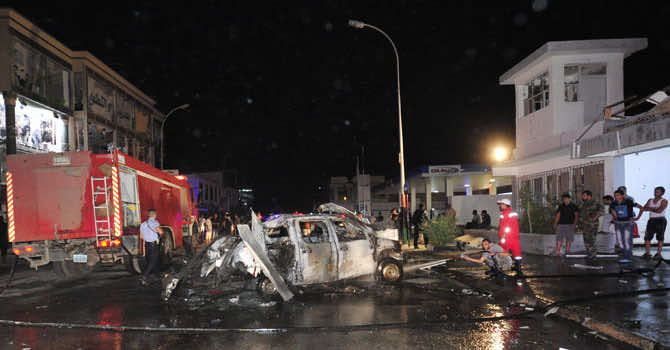 An assault on a US mission in Libya in which the US ambassador was killed was “a terrorist attack,” US Secretary of State Hillary Clinton acknowledged for the first time Friday.

“What happened in Benghazi was a terrorist attack, and we will not rest until we have tracked down and brought to justice the terrorists who murdered four Americans,” Clinton said.

Since the September 11 siege, “we are taking aggressive measures at all of our posts to protect our staffs and their families along with locally employed people,” she added.

Clinton briefed lawmakers about the events in Benghazi in closed door sessions on Friday, and was the most senior member of the US administration so far to say that it was a terrorist attack.

White House spokesman Jay Carney on Thursday described the assault on the US consulate as a “terrorist attack” saying it could have links to Al-Qaeda.

But the Obama administration had repeatedly declined over the last week to term the attack, which killed US ambassador Chris Stevens, as an act of terror, and officials said they believed it was spontaneous rather than pre-planned.

President Barack Obama, asked at a forum for Hispanic voters in Miami on Thursday whether Al-Qaeda was involved in the Benghazi attack, said: “We don’t know yet, and so we’re going to continue to investigate this.”

Clinton has announced an official review into security at the consulate which was targeted during a wave of rage across the Muslim world at a film made on US soil deemed offensive to Islam.