French far-right leader Marine Le Pen called Friday for a ban on the wearing of Muslim veils and Jewish skullcaps in public, adding to religious tensions sparked by cartoons of the Prophet Mohammed.

In an interview with the newspaper Le Monde, Le Pen called for religious headwear to be banned “in stores, on public transport and on the streets.”

Asked whether the ban should apply to the Jewish skullcap, known as the kippah or yarmulke, as well as Muslim headwear, she said: “It is obvious that if the veil is banned, the kippah is banned in public as well.”

Le Pen, who shocked the French elite by winning almost 18% in the first round of this year’s presidential vote, also repeated calls for bans on public prayers, kosher and halal foods in schools and foreign government financing of mosques in France.

President Francois Hollande denounced her comments, saying: “Everything that tears people apart, opposes them and divides them is inappropriate, and we must apply the rules, the only rules that we know, the rules of the Republic and secularism.”

“Marine Le Pen wants to ban any signs of religion on the street, starting with the veil and the kippah. By doing this, she shows she understands nothing of secularism. Secularism is not the eradication of all religious expressions in society.”

Richard Prasquier, who heads France’s main Jewish council CRIF, said the statement showed there were “secular fanatics just as there are religious fanatics.”

“Obviously, I am hostile to both,” he said.

The main Muslim council CFCM said the far-right icon wanted to “set up a totalitarian regime in France.” 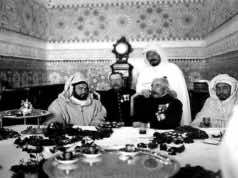